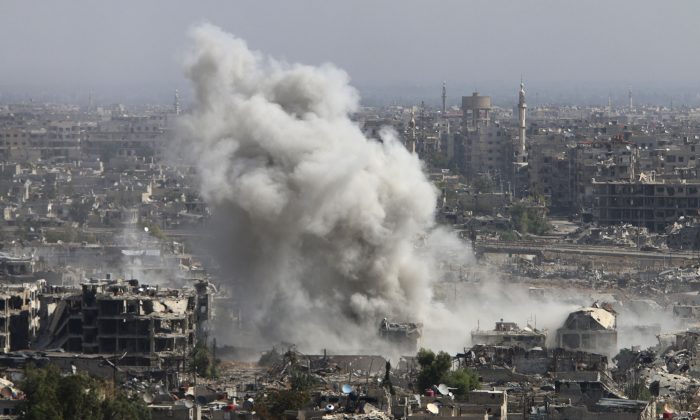 BEIRUT—Syria on Monday accused the U.S.-led coalition of bombing an army camp in the eastern part of the country, killing three Syrian soldiers and wounding 13, but a senior U.S. military official said the Pentagon is “certain” the strike was from a Russian warplane.

The dispute over the deadly airstrike underscored the increasingly chaotic skies over Syria as various powers hit targets in the war-ravaged country. The U.S.-led alliance began its airstrikes in Syria in September 2014, while Russia’s air campaign began a year later.

In a letter to the United Nations, the government in Damascus said four aircraft from the coalition targeted the army camp in the eastern city of Deir el-Zour on Sunday night. In addition to the casualties among the troops, it said the attack destroyed armored and other vehicles, and a weapons and ammunition depot.

“This hampers efforts to combat terrorism and proves once again that this coalition lacks seriousness and credibility to effectively fight terrorism,” said the letter, which was published in Syrian state media. The government refers to all those fighting to overthrow President Bashar Assad as “terrorists.”

It was the first time Syria has accused the U.S.-led coalition of hitting its troops.

The U.S. denied the claim, saying four alliance airstrikes in the eastern province of Deir el-Zour all hit oil wells about 55 kilometers (34 miles) southeast of where the Syrian government said its camp was struck.

“We did not strike any vehicles or personnel targets in this area. We have no indication any Syrian soldiers were even near our strikes,” the coalition statement said, adding that it takes allegations of potential collateral damage seriously and investigates them.

Moreover, a U.S. military official said Washington was “certain” it was a Russian airstrike that hit the camp.

Radar shows Russian bombers making seven passes over the city of Deir el-Zour dropping munitions, the official said, adding that one of the TU-22s made a pass over the area of the army camp within one minute of the explosion that killed the Syrian troops. Overall, the Russian bombers launched strikes in four locations around Deir el-Zour.

The U.S. officials spoke on condition of anonymity because they weren’t authorized to discuss the matter publicly.

There was no immediate comment from Russian Defense Ministry.

The U.S. officials said it was likely the Russians mistakenly hit the Syrian government camp. The U.S. military has been widely critical of Russia’s often indiscriminate strikes, saying Moscow routinely uses so-called “dumb bombs” rather than the precision-guided munitions used by the coalition.

The Britain-based Syrian Observatory for Human Rights, which relies on activists in Syria, also reported the airstrikes and a similar death toll. The Observatory said the strikes were “believed” to have been carried out by the coalition.

The planes hit the camp known as Sa’iqa, the Observatory said, though it gave a slightly different account, saying the camp is near the village of Ayyash in the western countryside of Deir el-Zour.

A Facebook page used by Islamic State (ISIS) militants to post news said several coalition warplanes flew over ISIS positions about 8:30 p.m. Sunday, then headed toward areas controlled by the Syrian government and struck an arms depot in the village of Ayyash, west of Deir el-Zour. Several strong explosions were heard, it said.

The city of Deir el-Zour is mainly held by ISIS, but the Syrian government maintains a presence in some parts of it.

The ISIS-affiliated Aamaq news agency released a video showing wide destruction in a residential neighborhood in Deir el-Zour, saying it was bombed by Russian warplanes. The video showed a wounded child being carried away and a dead boy was on a stretcher.

The video appeared genuine and corresponded to other Associated Press reporting of the events.

The U.S.-led coalition has been striking at ISIS targets in Syria for more than a year, and France and Britain recently began their own airstrikes. Russia is also carrying out airstrikes, in coordination with the Damascus government.

The Obama administration has repeatedly called on Assad to step down. It has refrained from targeting his forces, fearful of being dragged deeper into the increasingly complex civil war.

Russia began its campaign Sept. 30, saying its airstrikes are meant to weaken ISIS and other “terrorists” in Syria. Syrian troops backed by the Russian bombings have captured areas from ISIS in recent weeks.

President Vladimir Putin’s spokesman, Dmitry Peskov, said in Moscow that Russian officials have repeatedly emphasized a coordinated effort in Syria against the extremists.

“An effective fight against these dangers is only possible on the platform of a united coalition and a full coordination of our joint actions,” Peskov told reporters.”We believe that international terrorism, in particular ISIS, which has effectively occupied a sizeable part of Syria and Iraq, poses an equal threat to all of us, all the nations,” he said.

The Syrian Observatory for Human Rights said airstrikes in the village of Khan in the northeastern province of Hassakeh killed 26 people, including seven children and four women. It said the strikes were believed to have been carried out by the U.S.-led coalition supporting Kurdish fighters in the province.

Airstrikes also hit several positions in the extremists’ de facto capital of Raqqa in northern Syria, killing and wounding at least 32 fighters, according to several anti-ISIS activists. Media controlled by ISIS accused the Russians of being behind those attacks, saying civilians were killed.

The coalition has focused primarily on disrupting ISIS’ oil income, stepping up airstrikes in recent weeks on oil fields and facilities.

A new analysis by the conflict monitoring group IHS estimated the ISIS group’s overall monthly revenue in late 2015 to be about $80 million, most of it coming from the collection of taxes in areas under its control in Syria and Iraq.

The analysis of open source intelligence, including social media, said about half the revenues comes from taxation and confiscation, while about 43 percent comes from oil. Drug smuggling, the sale of electricity and donations make up the rest.

“Unlike al-Qaida, the Islamic State has not been dependent on money from foreign donors, to avoid leaving it vulnerable to their influence,” said Columb Strack, senior analyst at IHS, and lead analyst for the IHS Conflict Monitor.

IHS said the airstrikes have significantly degraded the group’s refining capacity and ability to transport oil via tanker convoys. It did not elaborate.