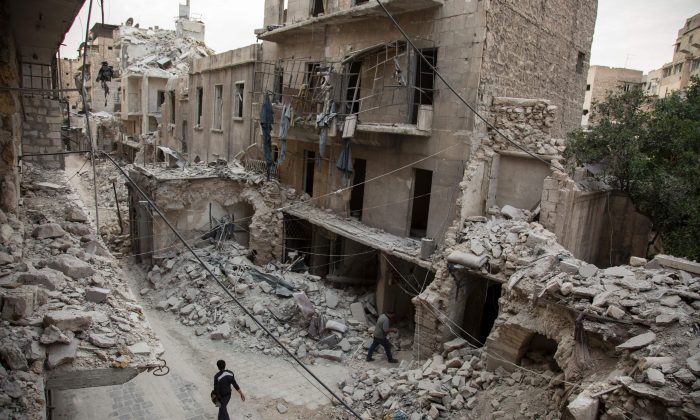 A Syrian man walks past destroyed buildings on May 2, 2016, in Aleppo's Bab al-Hadid neighborhood which was targeted recently by regime airstrikes. Aleppo residents ventured out onto the streets, taking advantage of a lull in violence in the northern Syrian city as the United States pushed to salvage a ceasefire. (Karam al-Masri/AFP/Getty Images)
Middle East

The latest round of talks in Geneva has failed to curb a dramatic spiral of violence and the tragedy in Syria is deepening rapidly. A hard-won and admittedly imperfect ceasefire has been broken, resulting in hundreds of deaths, particularly in Syria’s second city, Aleppo.

The Syrian Observatory for Human Rights documented the deaths of 3,116 people during April 2016. In recent days, U.S. Secretary of State John Kerry has sought to revive the process, yet a number of structural problems remain. The sheer number of actors involved in the talks, all arriving with competing visions of what a post-conflict Syria would look like, have caused serious problems.

Kerry himself said the conflict is “in many ways out of control” and the fact that strikes continued across Syria, even during the peace talks, badly undermined the trust-building work that is crucial to any successful peace deal. The breakdown resulted in a barrage of attacks as the Syrian President Bashar al-Assad sought to wrestle Aleppo back from rebel control. In February, Assad vowed to regain control of all of Syria, seemingly with tacit approval from Russia.

In response to the breakdown of the ceasefire, rebel groups vowed revenge and suggested that any “attack against any liberated area where one of our factions is present will be considered an assault against all faction … and we will have a right to respond.”

The situation in Aleppo in particular, and across Syria in general, is increasingly precarious. As the conflict enters its sixth year, the death toll has passed 400,000, and 11 million have been displaced from their homes. While 4 million have left Syria, 7 million remain. Daily life is far removed from what it was before the war started: infrastructure is crumbling, everyday Syrians struggle to meet their basic needs, and it remains extremely difficult to get humanitarian aid into certain parts of the country.

One citizen of Aleppo described life in the city as like “an apocalypse” and since the conflict began, the population has plummeted from 2.4 million to around 400,000. Basic infrastructure across the state has been destroyed, posing serious challenges to the provision of education and welfare. Medical personnel are increasingly in the firing line, and Joanne Liu, president of Médecins Sans Frontières (Doctors Without Borders), noted the rising violence against civilian infrastructure, including hospitals. Aleppo’s last pediatrician was killed in April.

Since February Médecins Sans Frontières has refused to share details of where its hospitals are because it says providing GPS co-ordinates to Assad and Russian forces does not protect them, but increases the chances of attacks on its facilities. Three hospitals have been hit since the ceasefire broke down, amid suggestions that Assad is seeking to retake all of Syria.

According to the white helmets, the main emergency response force in Syria, the last week alone has seen 260 airstrikes and 110 artillery bombardments, killing 189 and injuring 394. While violations have been documented on all sides of the conflict, the Saudi foreign minister, Adel Jubeir, highlighted the power imbalance that underpins the air war: “There is only one side that is flying airplanes, and that is Bashar al-Assad and his allies, so they are responsible for the massacre of women, children, and the elderly.”

This is by no means a consensus view. A number of voices still refer to Assad as the legitimate ruler of Syria, and explicitly or by implication suggest that violence against his rule is unlawful and illegitimate. Others argue that to defeat the Islamic State (ISIS) and prevent the spread of groups such as Jabat al-Nusra, the West must support the Assad regime. Of course, this argument ignores the way Assad has treated the Syrian people.

While “legitimacy” is a malleable concept in international law, it’s obvious that when a government commits grave violations of sacrosanct international norms then that government should forfeit its legitimacy. As international relations scholar Jason Ralph has pointed out, the Syrian state has manifestly failed to exercise its sovereignty responsibly, and has therefore surrendered its right to non-intervention. Ralph made this point in the context of the fight against ISIS, but it can—and should—also be applied to the way Assad has treated his population.

The norm of the Responsibility to Protect exists as a means of preventing such atrocities from being committed, yet requires the approval of the UN Security Council and it is here that the international community has once again failed the people of Syria. The ability to wield a veto has ensured that other countries’ geopolitical interests have left Syria burning while the world watches.

What’s immediately clear is there cannot be diplomatic progress so long as the ceasefire agreement is being flagrantly violated. The extension of a truce into Aleppo is paramount, but the forces who could wrangle it are stuck discussing how to get to discussions about how to achieve it.

One possible solution would be to provide rebels with anti-aircraft weapons, but that comes with concern about such weapons falling into the wrong hands. Debates about whether to arm rebel groups have been underway ever since the Syrian conflict began, but debates are shaped by the concern that these weapons would fall into the hands of ISIS or Jabat al-Nusra.

The anger and despair of those across Syria was summed up in these words from a civilian in Aleppo: “For six years now we have been dying while these men talk in conference rooms […] We are totally alone.”

The people Syria should not be left alone. The international community has a responsibility to protect people who cannot protect themselves—and it’s high time that responsibility was taken seriously.

Simon Mabon is a lecturer in international relations at Lancaster University in the U.K. This article was originally published on The Conversation.