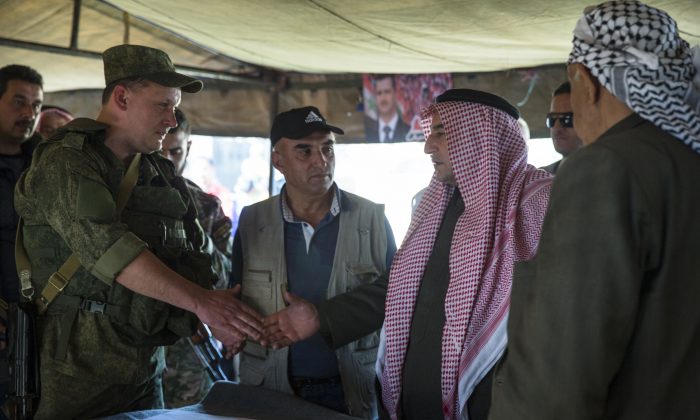 FILE -- In this March 2, 2016, file photo, Sheikh Ahmad Mubarak, second from right, shakes hands with a Russian military officer after signing a cease-fire declaration in Maarzaf, about 15 kilometers west of Hama, Syria. A shaky cease-fire in Syria brokered by Moscow and Washington has survived its first week, outlasting expectations and providing a glimmer of hope that a diplomatic solution to the five-year-old war may be possible.(AP Photo/Pavel Golovkin, File)
Middle East

BEIRUT— Syrians in rebel-held areas took advantage Friday of a week-long cease-fire to rally against President Bashar Assad, demanding his resignation, while a top opposition figure said his side believes it is “not suitable” for peace talks to resume in Geneva next week.

Meanwhile, France’s president expressed optimism, saying discussions about a political transition in Syria will “accelerate” with the truce holding across the war-wracked country.

The rallies in rebel-held areas were small — hundreds protested in the eastern sector of the city of Aleppo, in the western Waer neighborhood of Homs and in Idlib province — but they reflected a sense of relief amid the cease-fire that has mostly held since it went into effect across the country last Saturday.

The protesters called on Assad’s government to release detainees from prisons and lift several sieges on opposition areas — issues that have been key demands of the opposition ahead of peace talks planned to resume in Geneva next Wednesday.

In a blow to those plans, Riad Hijab, who heads the opposition High Negotiations Committee, said that circumstances were not suitable to resume the talks, adding that the United States has “made many concessions” to Russia, one of the main backers of Assad.

Despite the truce, Syrian military operations are still ongoing, detainees have not been released by Damascus and little aid is entering rebel-held besieged areas, Hijab said in Paris.

He spoke shortly after French President Francois Hollande, after speaking with the leaders of Russia, Germany, Britain and Italy, said from Paris that there was agreement to take advantage of the truce to coordinate humanitarian aid and open a process of political transition in Syria — though he cautioned about advancing too quickly.

High-level international discussions about Syria have intensified since the ceasefire went into effect, although the truce does not encompass the whole of the country. The “cessation of hostilities” deal does not include the Islamic State group and al-Qaida’s affiliate in Syria, the Nusra Front, as well as other militant factions designated terrorist organizations by the United Nations.

British Foreign Minister Philip Hammond, also in Paris, said the hope is that ultimately a cease-fire would allow Syria’s moderate opposition and backers of the Assad government to work out a solution and fight the extremists together.

Syria’s indirect peace talks broke down in Geneva on Feb. 3, amid a government offensive under the cover of Russian airstrikes.

The partial truce has dramatically reduced overall violence across the devastated country — a remarkable accomplishment in a war that has killed at least 250,000 people, displaced half the population and decimated towns and villages. Because the cease-fire agreement excludes areas held by the Islamic State group and the Nusra Front, some of the continuing violence is not technically a breach of the truce. Also, civilian casualties have dropped sharply since the cease-fire went into effect.

“This cease-fire, cessation of hostilities, is by no means perfect but it has reduced the level of violence. It has created an opportunity for some humanitarian access,” said Hammond.

But Hijab claimed that more than 50 rebel-held areas have been targeted during the truce.

“The U.S. has made and continues to make many concessions to Russia, which affect the future of the Syrian people,” Hijab said.

He also reiterated the opposition’s stand that there should be no political role for Assad in the future or during the transitional period for Syria.

Syria’s conflict, which erupted in March 2011 as a popular uprising against Assad’s authoritarian rule — influenced in part by the Arab Spring movements across the Mideast — quickly descended into an all-out civil war that gave an opening to militants such as the Islamic State group and the Nusra Front to seize large swaths of land.

The current cease-fire has become the most promising initiative in years to help end the war, raising expectations ahead of next Wednesday’s planned resumption of Geneva peace talks.

On the ground in Syria, pro-opposition activist groups reported some hostilities on Friday, including shelling and airstrikes in different parts of the country.

According to the Britain-based Syrian Observatory for Human Rights and the Local Coordination Committees reported airstrikes on the eastern Damascus suburb of Douma.

The rebel alliance known as the Army of Islam maintains the largest presence in the Douma area, after its fighters routed Islamic State militants from there in August 2014. A few hundred Nusra Front fighters are also reportedly operating in the area.

The Observatory and the LCC also reported that Syrian government forces shelled the northwestern town of Khan Sheikhoun, saying three women were killed there.

Also Friday, some 23 trucks carrying aid entered the area of Wafideen, near Douma. A U.N. official in Damascus, Yacoub El Hillo, told reporters that U.N. medical items will cover the needs of around 15,000 people in the area, with other supplies such as food and non-food items enough for about 10,000 people.

He stressed that more aid convoys will be delivered soon to other cities in the eastern Ghouta region.

Later Friday, Turkey’s state-run Anadolu Agency said Turkish artillery units hit Islamic State targets across the border in Syria, north of the city of Aleppo. It was the second Turkish artillery attack on IS since the cease-fire started. There were no further details.

In Moscow, the Foreign Ministry said top Russian diplomat Sergey Lavrov and his American counterpart John Kerry spoke on Friday by telephone about the process of resolving the Syrian conflict.

A ministry statement said the two reaffirmed the intention to “further close interaction of our countries in the military sphere” in Syria and called for “an early start of negotiations in Geneva under the auspices of the U.N. between the Syrian government and the whole spectrum of the opposition, during which Syrians themselves should determine the future of their country.”