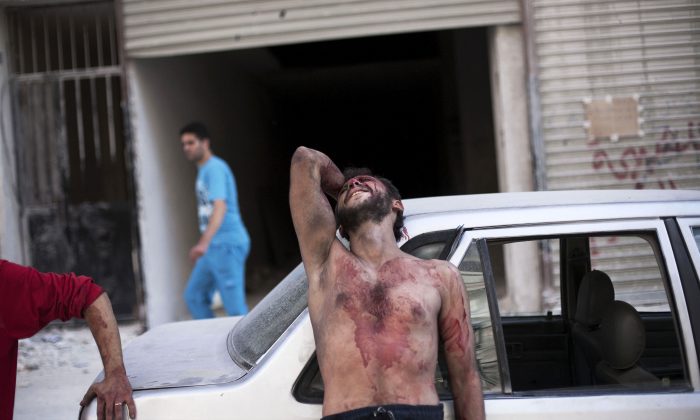 In this Thursday, Oct. 4, 2012 file photo, a Syrian man cries outside the Dar El Shifa hospital in Aleppo, Syria after his daughter was injured during a Syrian Air Force strike over a school where hundreds of refugees had taken shelter. Syria's uprising was not destined to be quick. (AP Photo/ Manu Brabo)
Middle East

The drone targeted a “civilian car” in the village of Kom, killing five, the report said, adding that the strike was close to a busy market.

US, Turkey Aim for ISIS-Free Zone in Northern Syria

Quneitra governor Ahmad Sheikh Abdul-Qader said the attack happened on the road leading to the village of Khan Arnabeh, near Kom, and destroyed the car.

Syrian state TV reported that an air raid just before midnight Thursday in the southern region of Quneitra killed a soldier and wounded seven.

The report quoted an unnamed military official as saying that the Thursday night attack targeted a military post near the Israeli-occupied Golan Heights.

The raid came hours after militants in Syria fired several rockets into northern Israel on Thursday afternoon, prompting Israeli retaliatory fire, the Israeli military said. It was the first time since the 1973 Mideast war that rockets from Syrian territory have slammed into Israel.

State news agency SANA reported late Thursday that an Israeli helicopter launched several missiles on Quneitra in the evening. It said the missiles hit the Transportation Directorate and the Municipality Building.

Syrian TV said the air raids aim to “boost the morale of terrorist organizations,” claiming that Israel is backing militants in the area.

Israel and Syria are bitter enemies. Israel has avoided taking sides in the Syrian civil war, which pits President Bashar Assad’s government against an array of militants, including the brutal Islamic State group.