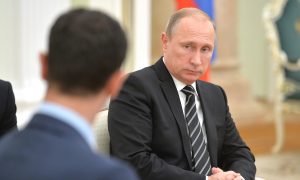 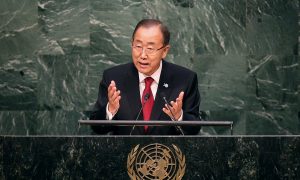 Why Can't the UN Protect Civilians in Places Like Syria?
0 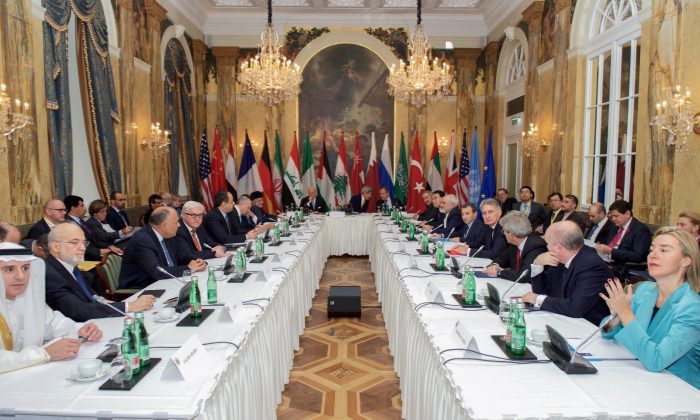 Inconclusive: a conference in Vienna at the end of October failed to reach a resolution on Syria. (U.S. State Department)
International

The answer from Russia’s foreign ministry spokeswoman Maria Zakharova was blunt. Asked on Nov. 3 if saving Syria’s president, Bashar al-Assad, was a matter of principle for the Russians, Zakharova replied: “Absolutely not, we never said that.”

Driving home the point, she added: “We are not saying that Assad should leave or stay,” declaring that it was up to the Syrian people to decide his fate.

In October, Russia began bombing rebel positions inside Syria, as well as the Islamic State, to prop up an Assad regime facing military defeat. At the end of the month, Moscow’s efforts for an international conference to confirm Assad’s short-term hold on power produced a meeting in Vienna.

Russia is having to rethink its approach because its political-military strategy to prop up the Assad regime has not been successful.

But is Russia now reconsidering that situation and preparing to ditch the Syrian leader? The question deserves more than a yes-or-no answer. Russia is having to rethink its approach because its political-military strategy to prop up the Assad regime, if not the president, has not been successful. It has also led Moscow to diverge from Assad’s other main ally, Iran.

Assad supporters, both inside and outside Syria, quickly rallied to say that Zakharova’s statement was merely a reiteration of a long-standing Russian position. They cited declarations from Russian President Vladimir Putin and his officials throughout 2012, such as the following: “We aren’t concerned about Assad’s fate. We understand that the same family has been in power for 40 years, and changes are obviously needed.”

The line—similar to the Nov. 3 statement—was this: “This issue has to be settled by the Syrians themselves.”

But then Russia regularly has changed its Syria policy. After Iran and Hezbollah stepped up political, economic, and military intervention for the Assad regime in early 2013, for example, Russia pulled back from that earlier “he can go” rhetoric and began contributing strategic support themselves.

After the regime’s chemical weapons attacks near Damascus in August 2013, Moscow moved quickly to ensure that the United States and other countries would not act to get rid of Assad. And from early 2014, they convened meetings in Moscow between regime officials and a nominal opposition, in which Assad’s representatives repeated that the president’s future was not up for discussion.

Days before Russia began its airstrikes, in an interview on U.S. television, Putin carefully set out a line of support for the regime while avoiding any definite statement about Assad’s personal fate:

Question: “As you know, some coalition partners want al-Assad to go before they can support the government.”

Putin’s strategy was to use the bombing of “terrorists” to buy time for Assad and his inner circle. While the Russian airstrikes supported the Syrian military’s five-front offensive pushing back the rebels, Moscow tried to arrange international acceptance of the president’s hold on power, at least in the short term.

Initially, they succeeded: Fearing Russian escalation, the United States, Britain, Germany—and even Turkey—accepted that Assad could remain for up to six months during a “political transition.”

But then the problems began. Despite more than 1,600 Russian aerial missions, hitting more than 2,000 targets, Assad’s army largely has failed to gain ground. The only advance was south of Aleppo city—and even there the Syrian military has yet to capture a major position.

Meanwhile, it was the Islamic State (ISIS) that won a strategic victory, cutting the main route into Aleppo. Rebels have also gained territory in a counter-offensive in Hama Province.

Politically, the long-awaited international conference in Vienna on Oct. 30 did not give the Russians a breakthrough. On the contrary, it quickly descended into a shouting match between Saudi Arabia—a leading supporter of the Syrian opposition and rebels—and Iran.

The Saudi hard line buttressed the insistence of the United States and European powers for a “real” transition in which Assad would be gone after a year. The Iranians held out for a process of elections—a line also pushed by Russia before the conference—in which Assad or members of his inner circle could “win” and thus retain power.

The Russian Foreign Minister Sergei Lavrov quickly took stock of the situation after the Vienna conference. He told journalists: “We have no agreement on the destiny of Assad. Russia believes that it is up to the Syrian people to decide within the framework of the political process. … The Syrian people should decide the future of their country.”

With the Saudi objections and “political transition”—a requirement set down in international agreements since mid-2012—in the way, Moscow shifted its approach. Instead of playing up a second international meeting, it said representatives of the Assad regime would meet opposition figures in Moscow.

The Russian foreign ministry and military suddenly declared that they were finding common ground with the “opposition.” The ministry said contacts were developing with the Free Syrian Army—a claim denied by rebels—and other groups. The defence ministry declared on Tuesday that unnamed opposition factions had provided coordinates for airstrikes on “terrorist targets.”

Moscow is seeking some political space—any political space—in which Assad’s officials and a nominal opposition can agree on the continuation of the regime, possibly supplemented with a few “opposition” members, in power. But in previous discussions, Assad’s representatives have always drawn a red line at giving up the president.

In a meeting on Tuesday, Iran’s Deputy Foreign Minister Hossein Amir Abollahian supported the position in a meeting with Syrian counterpart Feisal al-Mikdad, saying that those looking for “transitional government” were “divorced from realities on the ground.”

With no prospect of a military victory to relieve the pressure, Russia cannot escape its dilemma: either it redoubles its military support for the Assad regime, effectively accepting the president’s demand that he remain in control, or it seeks a way to push aside Assad and save face.

But that dilemma is already producing a serious complication for the Russians, with Iran firmly telling Moscow that Assad should not be abandoned.

The reception of Syrian Deputy Foreign Minister Mikdad in Tehran was one message to Russia. The head of Iran’s Revolutionary Guards, General Mohammad Ali Jafari, issued another on Monday, Nov. 2, saying that for Tehran, the Syrian regime cannot exist without Assad: “The resistance is completely dependent upon Bashar al-Assad in Syria, and we cannot ignore this issue. … After him, we do not have anyone to fill that hole.”

Then Jafari noted, “It is possible … that [Russia] is not looking for Assad to remain.”

On the surface, Russia’s spokeswoman Zakharova was taking refuge on Tuesday, Nov. 3, in a line that Moscow has put out since 2012. But below the surface, the Russians are in trouble over their political and military gamble. Putin did not want to be in a position where his foreign ministry is putting out holding statements. He wanted to be able to point to a resolution in which the future of key members of the Assad regime, if not the president himself, would be assured.

That has not happened during the month-long Russian airstrikes. It did not happen at last week’s Vienna conference. And it is not likely to happen in the near future. The “ditching” of Assad is tangential to that bigger problem.

Scott Lucas is a professor of international politics at the University of Birmingham, U.K. This article was previously published on TheConversation.com