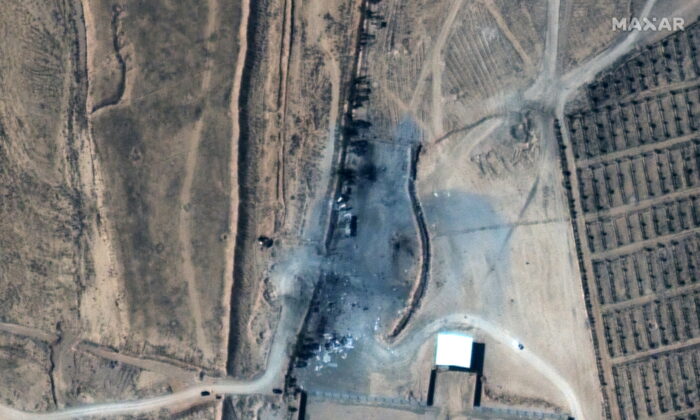 A close up view of destroyed buildings at an Iraq-Syria border crossing after airstrikes are seen on Feb. 26, 2021. (Satellite image (copyright) 2021 Maxar Technologies/Handout via Reuters)
Executive Branch

The airstrikes launched against militants in Syria last week sent a “very strong signal,” the Pentagon said Monday, rebutting claims by militant groups that the strikes had no real effect on them.

“I haven’t seen those comments, I would go back to what I said last week: that this was really designed to do two things, to remove that compound from their utilization of it as an entry control point from Syria into Iraq, and to send a very strong signal that we’re not going to tolerate attacks on our people and Iraqi partners,” John Kirby, the Pentagon’s chief spokesman, told reporters during a press briefing in Washington.

The United States on Feb. 25 launched strikes in eastern Syria.

Kirby said shortly after the strikes struck that they were authorized by President Joe Biden “in response to recent attacks against American and coalition personnel in Iraq, and to ongoing threats to those personnel.”

One attack was a rocket strike on an airport near Erbil 10 days prior in Iraq’s semi-autonomous Kurdish-run region. That launch injured six people, including a U.S. service member, and killed a civilian contractor.

According to the United States, the retaliatory strikes destroyed buildings used by Iranian-backed groups including Kait-ib Hezbollah.

In comments translated by the Middle East Media Research Institute, militants downplayed the impact of the strikes.

Unnamed militants, for instance, told Sabereen News that the strikes targeted an empty building and killed only one fighter.

Kirby said the latest intelligence indicates one militia member was killed and two others were wounded. He also said the strikes took out nine buildings.

Members of Congress decried the attacks, including several Democrats, noting Congress didn’t grant approval for the military action. But the White House said congressional leaders were notified prior to the strikes, while Biden said the message sent to Iran was “you can’t act with impunity.”

Both the White House and military officials have defended the strikes as an appropriate measure.

“This proportionate military response was conducted together with diplomatic measures, including consultation with Coalition partners. The operation sends an unambiguous message: President Biden will act to protect American and Coalition personnel. At the same time, we have acted in a deliberate manner that aims to de-escalate the overall situation in both eastern Syria and Iraq,” Kirby said in a statement last week.

Members of Congress were slated to take part in a classified briefing early this week.