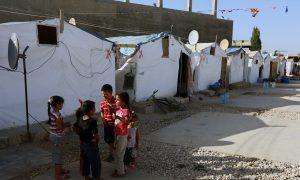 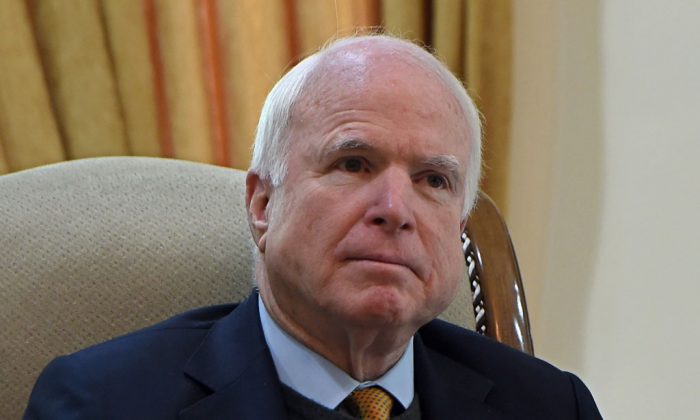 US Senator John McCain looks on during a meeting with Afghan Chief Executive Officer Abdullah Abdullah at the Sapedar Palace in Kabul on Dec. 25, 2014. (Wakil Kohsar/AFP/Getty Images)
Middle East

Syria Accuses John McCain and 3 Others of Entering Illegally

The letter said Syria “holds the governments of the states of which these persons are nationals fully responsible for the violations” of Syrian sovereignty.

Syria called on the secretary-general and the Security Council “to put pressure on those governments to take immediately the necessary measures against their nationals who enter Syrian territory illegally.”

“The Syrian government also holds the governments of those states fully responsible for threatening the territorial integrity of Syria and for dealing with non-state armed groups and designated terrorist groups,” the letter said.

The nearly four-year Syrian conflict has claimed over 200,000 lives, displaced a third of Syria’s population, and nurtured many armed opposition groups including the Islamic State extremist group which now rules over vast swaths of Syria and neighboring Iraq.

According to the letter, McCain entered Syria in June 2013 and “met with terrorist groups, including leaders of the Nusrah Front” which has been designated by the Security Council as an al-Qaida linked terrorist organization.

It said al-Tabtaba’i entered Syria in September 2013 and “provided money and arms to terrorists in Syria and took part in combat with them.”

Kouchner entered Syria last month and “visited a number of Syrian cities without the consent or knowledge of the Syrian government,” the letter said.