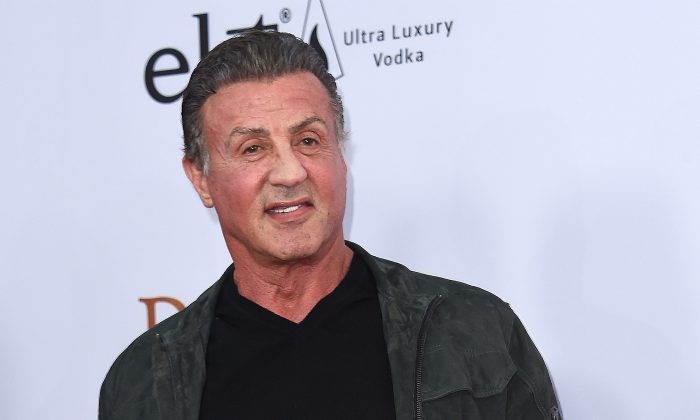 Sylvester Stallone attends the premiere of 'The Promise' at the Chinese theatre in Hollywood on April 12, 2017. (Chris Delmas/AFP/Getty Images)
Film & TV

The police report, recently recovered by the UK news outlet the Daily Mail, states that the movie star assaulted her while he was in Las Vegas in 1986, filming the movie “Over the Top.” The fan declined to press charges at the time.

In the report, the unnamed fan told the Las Vegas police that Stallone had forced her to perform sexual acts on himself and his bodyguard, and threatened to “beat her head in” if she told anyone.

The girl said Stallone gave her keys to his hotel room, where they had consensual relations. She then claimed Stallone “forced” her to perform a sex act with Stallone and his bodyguard, Michael ‘Mike’ De Luca, at the same time.

In the report, the girl said that at that point, she felt “very uncomfortable” but felt she had “no choice.”

When they were finished, the teen told the police, Stallone said she could not tell anyone because both he and De Luca were married. If she spoke up, “they would have to beat her head in,” she claims.

The police report states that Stallone and De Luca both “laughed after he made the comment.”

Stallone was 40 years old at the time of the alleged incident. De Luca, who was 27 at the time, was shot and killed by California police during a traffic stop in 2013.

Sylvester Stallone has responded to the report by saying that nothing of the sort happened.

“This is a ridiculous, categorically false story. No one was ever aware of this story until it was published today, including Mr. Stallone,”  Stallone spokesperson Michelle Bega said in a statement, as reported by celebrity gossip site TMZ.

“At no time was Mr. Stallone ever contacted by authorities or anyone else regarding this matter. It never happened.”

The girl claimed that she was at the Las Vegas Hilton, the same hotel as Stallone, during a vacation with family friends, from July 18–28, 1986.

She said she and her cousin were at the hotel’s arcade on July 23 when they saw actor David Mendenhall, who was playing Stallone’s son in the film. She met Stallone on July 25 and got his autograph.

In the police report, she claims Stallone asked her age and asked her “how she got such a build.”

The teen told police that she returned the next day, hoping to get another picture autographed for a friend. At that time, De Luca reportedly asked her what she would do if Stallone made a pass at her. She said she responded that she “would probably make a pass back at him.”

At this meeting, De Luca allegedly gave the girl the keys to Stallone’s room on the 27th floor of the hotel and told her to visit the actor as soon as she could.

Decided Not to Prosecute

According to the notes written by the police officer conducting the interview, “during the interview [the teen] became emotionally upset numerous times, crying and sobbing.”

According to police notes, the girl had “difficulty in relating her thoughts” and got “extremely emotional” when telling her story.

The notes on the report further state, “She indicated that if the sexual encounter had only been with Stallone, she would not pursue this matter, but due to the fact that Mike, the bodyguard became involved in the sexual incident, she didn’t know what she wanted to do.

“She states there was no actual physical force, but she did feel intimidated,” according to the interviewer’s notes.

When asked, the girl opted not to press charges. According to the police, the girl said, ”I’m humiliated and ashamed, but I don’t want to prosecute.

“I’m kind of scared and I’m very ashamed. I don’t want anybody else to have that happen to them, but I don’t want to prosecute. I cannot talk about this anymore, please leave me alone.”

She signed a form affirming that she declined to prosecute. Police, however, took her story seriously enough that they revoked De Luca’s permit to carry a concealed weapon on July 30, 1986.

One year after this report was filed, Stallone’s half-sister Toni-Ann Filiti, made claims that Stallone had raped and sexually assaulted her for years. She threatened to sue Stallone.

According to court records, Stallone “vigorously denied and continues to deny and dispute all claims of wrongdoing,” but settled with his half-sister out of court, paying her a lump sum of $2 million, as well as $16,666 a month for the rest of her life.