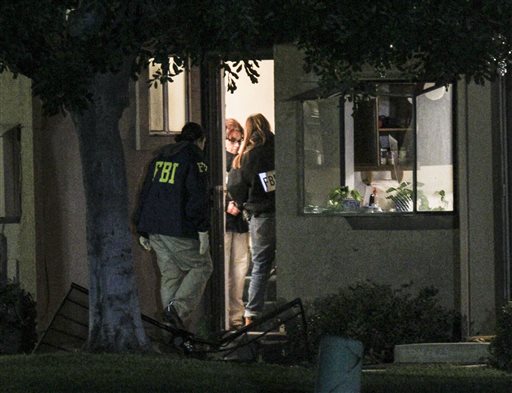 FBI agents search outside a home in connection to the shootings in San Bernardino, Thursday, Dec. 3, 2015, in Redlands, Calif.. A heavily armed man and woman opened fire Wednesday on a holiday banquet, killing multiple people and seriously wounding others in a precision assault, authorities said. Hours later, they died in a shootout with police. (AP Photo/Ringo H.W. Chiu)
US

Syed Rizwan Farook was at an employee party for local health officials on December 2 at the Inland Regional Center in San Bernardino, California.

The 28-year-old soon stormed out, though, angry, after arguing with another attendee. When he came back he was with his wife Tasheen Malik, and both were dressed in tactical gear and armed with two semi-automatic handguns and two .223-caliber assault rifles.

“Everyone dropped to the floor. It was during a holiday party,” Denise Peraza, 27, told relatives after she had been brought to safety, according to the Los Angeles Times. “The guys opened fire for 30 seconds, randomly, then paused to reload and began firing again.”

By the time their rampage had ended, 14 people were dead and others wounded. Some of the surviving victims were listed in critical condition.

“These people came prepared to do what they did as if they were on a mission,” said the city’s police chief, Jarrod Burguan, at a press conference.

“There had to be some degree of planning.”

The couple soon left the scene in a black SUV.

Police located them while checking on a lead in the nearby town of Redlands, and a pursuit started.

When police surrounded the vehicle, a deadly shootout occurred, leaving both Farook and Malik dead.

“The weapons we recovered — two long guns and two pistols — they will also have serial numbers on them that we can trace as long as they were produced by manufacturers either here in the U.S. or imported to the U.S.,” Davis said.

Two of the guns were purchased by another person who is now under investigation, reported the Associated Press. All four guns were bought four years ago, a spokeswoman with the Bureau of Alcohol, Tobacco, Firearms and Explosives said.

The rifles were powerful enough to pierce the standard protective vests work by officers, she added.

The couple was also wearing GoPro cameras that would have enabled them to record the massacre.

An “explosive device” was found at the scene of the shootout, and items that resembled pipe bombs were tossed outside during the chase.

The items were later examined and determined not to be bombs, but sources told Fox that the couple’s home was “an IED factory.” Several explosions were heard in the neighborhood as bomb squads working with robots swept the home late into the night.