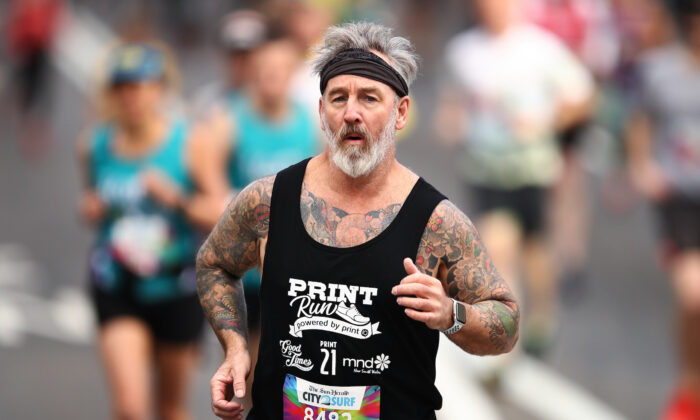 Huge crowds of brightly-dressed runners completed the race from Hyde Park to Bondi in the winter sunshine on Sunday morning as the race returned for its 50th year.

Around 60,000 people took part in the race, according to organisers.

Liam Adams won the race for the third time, crossing the finish line in a time of 41 minutes and 12 seconds.

Adams, 35, has been dubbed the “fastest electrician in Australia” and recently competed in the marathon at the Commonwealth Games in Birmingham, coming in fourth place.

His first placing in Sunday’s race comes 10 years after his last win in the Sydney event.

In 2021, COVID-19 lockdowns meant entrants could only compete virtually in what was due to be the race’s half-century.

This year, the fun run was back with a bang, with 17 bands playing along the course to entertain runners.

Some 20 participants maintained their bragging rights of participating in every City2Surf since 1971 as they took part in their 50th event.

The race encourages participants to raise money for charity and since 2008 has raised some $51 million (US$36.4 million) for 305 organisations.

All major roads running between the Sydney city centre and the eastern suburbs were closed early Sunday morning in preparation for the race.

Roads will begin to reopen from 11:30 a.m., with most closures expected to be lifted by 4 p.m.

“Motorists are urged to avoid Bondi Road because hundreds of buses will carry tens of thousands of participants between Bondi Beach and Bondi Junction throughout the day,” he said.