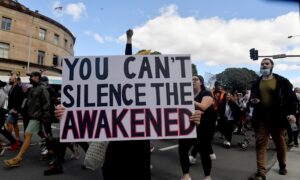 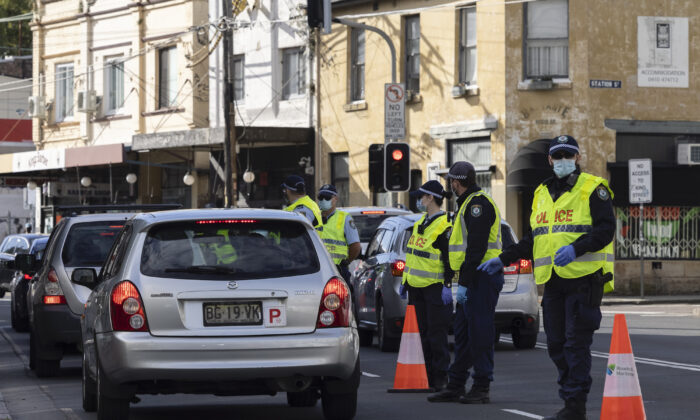 Australian police have prohibited taxis, rideshares, and passenger services from driving people to Sydney’s central business district on Saturday, in an effort to stop people from attending any anti-lockdown protests.

The prohibited zone was in force from 9 a.m. to 3 p.m. on Saturday amid the potential of anti-lockdown protests. Passenger services face fines of up to $500,000 if they fail to comply. Individuals could be fined up to $100,000, NSW Police said in a statement provided to The Epoch Times.

The prohibition notice was issued to seven transport providers in efforts to thwart what the NSW Police called “planned unlawful protest activity.”

Up to 1,000 police officers are out to enforce compliance, with officers even going door to door and meeting people at train stations and on trains, to question them about whether they intend to take part in protests, Nine News reported.

“A pandemic is not the time to protest and this prohibition notice is just one of the tools police have implemented today to ensure the safety of the community,” Central Metropolitan Region Commander, Assistant Commissioner Peter Thurtell said in a statement.

Thurtell said the NSW government’s restrictions are in place to protect the vulnerable and stop the spread of the CCP (Chinese Communist Party) virus, which causes the COVID-19 disease.

Essential workers and anyone requiring medical treatment will be exempt from the prohibition and can travel to the CBD, he said.

This comes as NSW Police move to prevent a recurrence of last weekend’s anti-lockdown protest, when Australians took to the streets in the thousands in a largely peaceful fashion to express their opposition to the state governments’ measures.

Sydney residents have been forced to face another four weeks of lockdown and restrictions, with the NSW government citing “low vaccination rates” as a key factor in its decision.

The large exclusion zone stretches from the Bradfield Highway at Milsons Point north of the Harbour Bridge, to the City West Link at Lilyfield, to South Dowling Street near Todman Ave at Zetland, and east to New South Head Road near Ocean Ave at Edgecliff.

NSW Police Commissioner Mick Fuller on Friday said that police were monitoring online activity about the planned protest for Saturday and didn’t expect the same numbers as last weekend.

“It appears it will not be in the same numbers. It can still be violent,” he told reporters on July 30.

But Fuller warned would-be protesters they would be met by the 1,000 strong police force, who would “be ready to deal with you, whether that be via the health orders or other laws.”