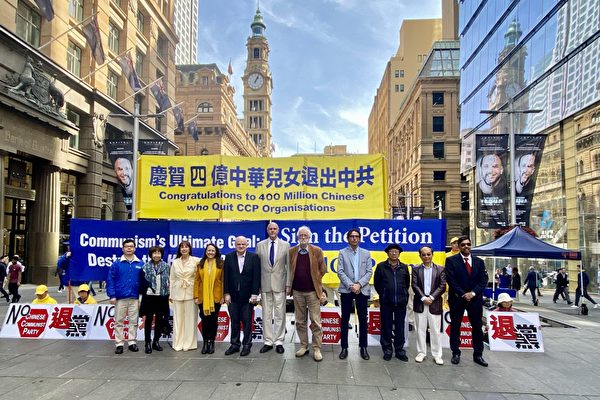 Milestone of 400 million Chinese quitting the Chinese Community Party (CCP) marked with a rally in Sydney, Australia, on Sept. 8, 2022. (The Epoch Times)
Australia

Sydney’s Martin Place on Thursday hosted a rally to mark the milestone of 400 million Chinese citizens withdrawing their memberships with the Chinese Communist Party (CCP).

Whether in mainland China or all over the world, Chinese people have constantly and for many years quit the CCP and its related organisations, such as the Young Pioneers, via the global Tuidang movement.

The Tuidang movement was triggered by an editorial series published in 2004 by the Chinese Epoch Times called “Nine Commentaries on the Communist Party.” The editorial details the brutal and deceitful history of the CCP, including its many movements to violently target segments of society over many decades.

“Four hundred million—this number is greater than some countries’ entire population,” said Yi Rong, president of the Global Tuidang Center in New York. “With such a large group abandoning the CCP and steering clear from its crimes, it will spur a positive change in Chinese society.”

The movement has been driven by adherents of Falun Gong, a spiritual discipline first introduced to the Chinese public in 1992.

Viewing the immense popularity of Falun Gong as an ideological threat to its atheistic authoritarianism, then-CCP leader Jiang Zemin in 1999 unilaterally launched a campaign to demonise and eliminate the practice and its practitioners.

Falun Gong, also known as Falun Dafa, is a meditation practice of the Buddhist tradition with moral teachings centred on the principles of truthfulness, compassion, and tolerance. This made Falun Gong very popular in China amongst a people whose ancient spiritual roots in Buddhism, Daoism, and Confucianism were denounced and decimated by the CCP.

Delivering a message on behalf of her husband, state New South Wales MP Fred Nile, Silvana Nile said that the CCP will be punished by God.

“It seems the wrath of God is coming down on the Chinese Communist Party,” Nero said. “God warned that those who suppress the truth will be punished.”

Nile declared that communism must end and cited examples of the CCP’s human rights violations.

She noted that the CCP kills Falun Gong practitioners for their organs, destroyed the ‘one country, two systems’ policy in Hong Kong, arbitrarily detains and persecutes Uyghurs, and that its top diplomat to Australia has said that Taiwan’s people would undergo so-called re-education if the CCP regains control of the island.

“All these examples show how the CCP is hell bent on eradicating freedom of religion, freedom of speech, freedom of thought and free will, with any means they want,” she said.

“I applaud those who have been brave enough to quit the CCP. The human cost of communism is too high and it needs to end.”

The CCP Is a ‘Group of Criminals,’ Not a Government

David Flint AM, an emeritus professor of law, known for leading Australians for Constitutional Monarchy and his tenure as head of the Australian Broadcasting Authority, said that the CCP regime is the enemy of the people.

“There was no constitution in China. The government in Beijing rules ruthlessly as every communist governments,” Flint said.

He said that tens of millions of Chinese people had died under the CCP regime.

“It’s not a government. It’s a group of criminals,” he said.

China Scholar Urges People With a Conscience to Quit the CCP

Feng Chongyi, an associate professor at the University of Technology Sydney, said that any person with a conscience should not only break with the CCP, but also fight against it.

A veteran China scholar, Feng said the CCP is the embodiment of evil, lies, and brutality and has committed enormous crimes against humanity, including the brutal killing of tens of millions of innocent Chinese.

“There is no excuse for anyone to associate with this evil organisation,” he said. “Let’s unite our force and fight against this evil regime as soon as possible.”

Barrister Says Communism is Opposite to Freedom

Sophie York, a barrister and lecturer in law at the University of Sydney, said that communism has brought only fear and suffering to the world.

“Marxism has caused tens of thousands of deaths of everyday people, wherever it was put into practice, from Eastern Europe to the USSR, China to Cambodia, Cuba to North Korea,” she said.

York said that under the CCP, Christians are persecuted, Falun Gong practitioners are imprisoned and have their organs harvested while still alive, and Uyghur Muslims are held in concentration camps for forced labor.

In addition, she noted that the CCP seeks to export its influence to other countries.

“They harass Tibet. They have spread their regime to Hong Kong, they threaten Taiwan,” she said.

“They do not respect international law, and they are infiltrating international institutions … They have unlawfully cemented over and militarised reefs in our region—in the territorial waters of the Philippines and other nations of the South China Sea, putting a Sword of Damocles over our nation’s exports transported on merchant vessels.”

“We must do all we can to prevent its reach from growing across our world,” York said.

Zhang Shaoyuan, an entrepreneur who fled to Australia from China four years ago, likened the CCP to a cult that uses fear to maintain control of Chinese people.

“The CCP uses violence to oppress the people. You can enter but not leave this organisation, which is a typical sign of a cult,” Zhang.

“In order to eradicate the poisoning of the CCP cult and devils from the root of our ideology, santui (quitting the CCP) is necessary.”

Before the rally, Falun Gong practitioners demonstrated the practice’s exercises and told passersby about the Tuidang movement.

The Tianguo Marching Band and Tongsong Choir, both comprised of Falun Gong practitioners, performed songs and music about quitting the CCP.