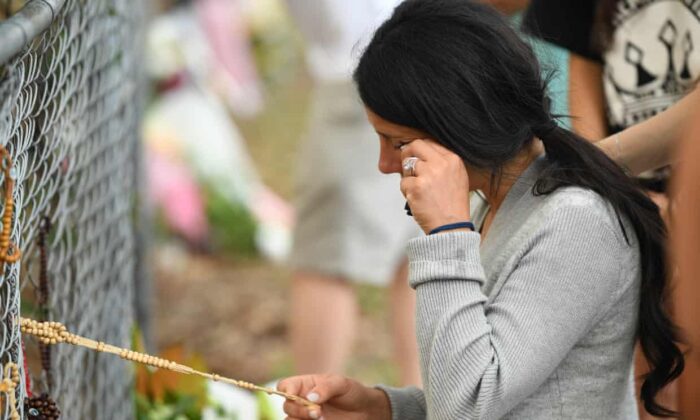 Leila Geagea pauses near flowers placed at the scene where a vehicle fatally hit three of her children in the Sydney suburb of Oatlands, on on Feb. 2, 2020. (Joel Carrett/AAP)
Australia

An Australian mother of three children who were killed after they were struck by an alleged drunk driver, has said she cannot hate the man accused of the fatal crash.

Samuel William Davidson, 29, was allegedly three times the legal blood alcohol limit when his vehicle mounted the curb and fatally struck four children on the night of Feb. 1.

Sydney mother Leila Geagea lost three of her six children: Sienna, 8, Angelina, 12, and Antony, 13, and their 11-year-old-cousin Veronique Sakr in the incident. All four died at the scene in the Sydney suburb of Oatlands.

“I think in my heart I forgive him. But I want the court to be fair. I’m not going to hate him because that’s not who we are,” she told reporters, AAP reported. “It feels very unreal. I feel like I’m still waiting for them to come home.”

The children’s father, Danny Abdallah, urged drivers to be more cautious on the roads as he struggled to put his grief into words.

“I don’t know what to say. I’m numb, probably that’s what I feel at the moment. All I want to say is please, drivers, be careful,” he said.

At the time of the crash, the four children were on a footpath riding their bikes to a shop to buy ice cream.

The Abdallah children were remembered for their charity work with the homeless in the Blacktown area.

“Antony, Angelina, and Sienna, and all Danny’s family joined us regularly and they put themselves in the service of those who are in most need of our help. They stood in line with the adult team members to serve food and to give a smile to those who needed it most,” charity Team Jesus said in a Facebook post.

“In fact, these little angels used to encourage or rather insist on their parents to take them to Blacktown on Friday night so they could serve, not the other way round. By this, they set an example to all other children to do the same and they made a huge impression on everyone who met them at this community service.”

“Not only did they serve at tables, but they insisted on praying for the people whom we served, and their prayers brought the blessings and favor of God upon the place,” the group wrote.

“Danny and Leila are not raising average children. I congratulate you Danny and Leila for being model parents and for raising three little saints who have joined the ranks of the angels in heaven. With sadness of heart, we farewell Antony, Angelina, and Sienna. We will miss you tremendously.”

Some have called for an overhaul to road rules in New South Wales following the fatal crash, including lowering speed limits in residential areas and tougher penalties for those found driving under the influence of alcohol.

“We need a more serious response to driving under the influence. It’s not taken seriously enough in our society,” said Sydney University professor David Levinson. “Speed limits are also relatively high. If you hit someone at a high speed you do more damage and are more likely to kill them.”

Others meanwhile suggested the breath alcohol limit be lowered in NSW from 0.05 to 0.02, to match the thresholds of other countries.

“The lower threshold of 0.02, which Norway uses with good effect, allows the opportunity of somebody who has consumed a small amount of cough medicine, for example,” trauma surgeon Dr. John Crozier told the ABC, adding that there was an “irrefutable” link between drink-driving and crashes.

Three of four of the other children who were with the Abdallahs and their cousin sustained injuries, but are believed to be in stable condition. Two girls, aged 10 and 13, were treated by paramedics at the scene, and a boy, 11, is hospitalized at the Children’s Hospital in Westmead where he has been put into an induced coma.

Davidson’s blood alcohol reading allegedly came back with a reading of 0.15, reported AAP.

He has been charged with 20 offenses, including four counts of manslaughter, dangerous driving occasioning death and grievous bodily harm, negligent driving, and drink-driving, and his next court appearance has been scheduled for April.