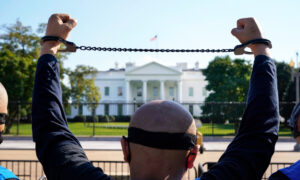 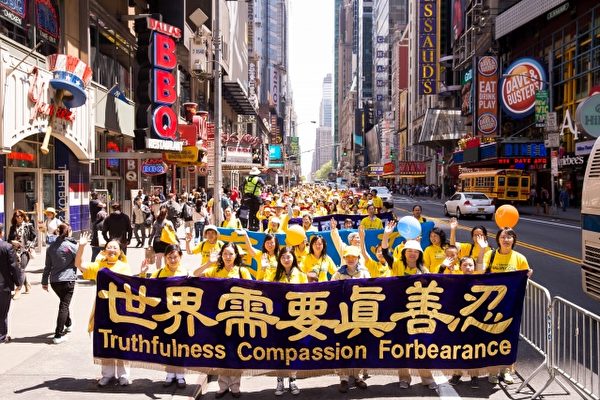 Falun Gong practitioners march in Manhattan to celebrate "May 13 World Falun Dafa Day" on May 15, 2015. (The Epoch Times)
Australia

A Sydney man has been making direct phone calls to Chinese officials in a remarkable attempt to convince them to stop arresting people of faith in Mainland China, and he’s doing it one phone call at a time.

The man, named only Yan for his safety, said he takes the time each week to make some international calls to China, contacting the public security authorities, the police, procuratorial organs, and courts. He speaks in Chinese and attempts to change the minds of any individuals who are participating in one of the worst persecutions ongoing in the country.

Yan is a Falun Gong practitioner, and he’s not the only person who makes these daring calls to connect with perpetrators of human rights abuses in China.

Falun Gong is a spiritual practice that originated in China in 1992. By the end of the decade, 70 to 100 million people were practicing, according to official estimates at the time. Threatened by its popularity, the then-Chinese Communist Party (CCP) leader Jiang Zemin launched a campaign in 1999 to eradicate the practice. Since then, millions of Falun Gong practitioners have been imprisoned while hundreds of thousands have been tortured, according to Faluninfo.net.

In carrying out his efforts, Yan told The Epoch Times that he takes a more direct approach to affect change because, as an overseas Chinese, he doesn’t face the same obstacles in making such calls as would people of faith in Mainland China, who would face direct retribution.

“We can even call Jiang Zemin from here,” he said.

Yan believes his efforts help to change the attitudes of people who have been taken in by the CCP’s propaganda. In order to justify its persecution of Falun Gong, the CCP relies on its state-owned media to slander the practice and practitioners.

Recounting a recent experience, Yan explained how in March he was spurred into action after reading a report on Minghui.org, a website dedicated to tracking the persecution of Falun Gong. The report described the recent detention and torture of five Falun Gong practitioners in northern China.

According to the Minghui report, five Falun Gong practitioners in a northern county were kidnapped during the Chinese New Year. Four of them were placed in a detention center, and another one suffered serious physical harm. Seven CCP officials were reportedly involved in the kidnapping, including the Secretary of the Political and Legal Committee, a National Security Captain, and several police officers.

It took him five days to get in touch with one of the officials, the National Security Captain.

After giving the man a friendly New Year greeting, Yan said he went straight to the point.

“Captain, on the second, third, and fourth days of the Chinese New Year, you led a team to arrest five Falun Gong practitioners,” he said. “Their families spent the New Year in tears, and they themselves spent the New Year in detention. Everyone has a conscience. How do you feel about it? Have you ever thought about it? Did you and your family have a happy and unworried New Year?”

“Is it wrong for Falun Gong practitioners to be good people? Do you know that the whole world supports Falun Gong, only the CCP persecutes it? Persecuting good and kind people. We can’t do these things anymore!” Yan said.

During the phone call, which lasted 15 minutes, Yan also told the official there is no legal basis in China for persecuting Falun Gong. He also informed the official that former CCP leader Jiang Zemin is being prosecuted in more than 30 countries now, and explained how on last year’s International Human Rights Day, the U.S. government sanctioned 17 perpetrators of human rights abuses, one of whom was a policeman at a local station in Xiamen, China.

He also spoke about the CCP’s forced organ harvesting of Falun Gong practitioners.

“From Jiang Zemin down to an ordinary policeman, all those who participated in the persecution are being held accountable,” Yan told the captain. “The CCP has deceived and used you in a political campaign, but after using you, it will forsake you in the end. You have to know that today’s participation is evidence of future sentencing.”

Upon hearing this, Yan said the captain said, “Thank you for telling me this. I got it.”

In the following days, Yan was also able to contact another four officials, including the Political and Legal Committee Secretary and three police officers. He said that three of them listened to Yan for more than 10 minutes.

Yan believes the calls are like a lifeline for those in China who have been blindly following the orders of the CCP, giving them a chance to choose between right and wrong.

In his conversations, he urges those in power to help practitioners escape the state-sponsored persecution.

But he noted that despite the calls and recent build-up of international pressure on the CCP, the persecution of Falun Gong practitioners is ongoing in China.

Yan also said that the CCP’s persecution of Falun Gong was escalating, citing two of the most recent campaigns, “Knock Door” and “Zero-Out.” These campaigns are a continuation of the ongoing campaign to eradicate the spiritual practice in China which began two decades ago.

“Zero-out means getting the roster of Falun Gong practitioners in 1999 when the persecution first started,” Yan said. “Harassing them one by one and asking: ‘Do you still practice Falun Gong?’ If they do, they will be forced to renounce their faith, otherwise they will be put into prison, tortured … their children will be implicated. All those kinds of things.”

When asked about what he wants the readers of English Epoch Times to know about China and the persecution, Yan said many western people could hardly understand or accept the evilness of the CCP and he urged them to start taking affirmative action against the regime.

“People in democratic countries are usually very kind. They didn’t believe the CCP is that evil in the past,” Yan said. “The spread of the CCP virus has awaked people in the west slowly, but the recognition is not that thorough yet.”

Yan hopes that as people become aware of the dangers associated with CCP, that more democratic countries will start sanctioning the Chinese regime for its domestic human rights abuses.

“That will be the time of death for the CCP,” he said.