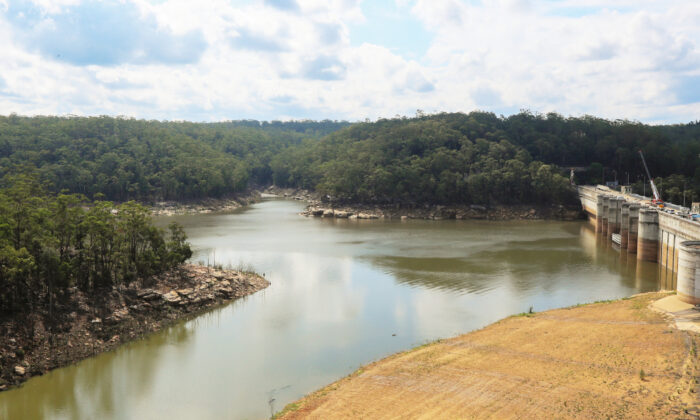 Sydney Dam Levels up Amid Downpour

Dam levels across greater Sydney have risen by more than 20 percentage points amid heavy weekend rainfall, with enough water for as much as 150,000 Olympic-size swimming pools flowing into Warragamba Dam.

Sydney, the Central Coast, and the Blue Mountains were soaked after receiving between 200mm and 400mm of rain from 9 a.m. Friday to 5 p.m. Sunday, with additional rain expected on Monday and through the week.

The Bureau of Meteorology suggested on Sunday that Sydney had not experienced such rainfall since before the new millennium.

Water NSW data on Monday morning showed that greater Sydney dam levels were at 64.2 percent, up from 41.9 percent in seven days.

The dam this time last year was 61.4 percent full.

Water NSW in a statement on Sunday said the ash and debris generated by recent bushfires around the Warragamba area would not affect water quality.

Two silt curtains are in place to intercept ash run-off.

“While it is likely some ash and debris has been washed into the upper reaches of the Warragamba system, there is no impact on the water quality being supplied for treatment. Any surface debris is being avoided by extracting water from 30m below the surface as a precaution,” WaterNSW said in a statement.

The Bureau of Meteorology has forecast more severe weather conditions on Monday with heavy rains, strong winds and damaging surf possible along the entirety of the NSW coast and inland southern NSW.

NSW’s coast has copped “extraordinarily” high amounts of rainfall with Sydney recording its heaviest drenching in up to three decades.

The rain was coupled with strong, gale-force winds that battered the east coast since Wednesday resulting in fallen trees and powerful waves.

NSW Bureau of Meteorology acting manager Jane Golding said the weather and its impact across the state imitated an east coast low.

“Over the last week we have seen some extraordinarily high rainfall all along the NSW coast,” she told reporters in Sydney on Monday.

Some areas copped up to 700mm of rainfall since Wednesday including Robertson in the Southern Highlands, which saw 698mm of rain – 500mm of which across the weekend alone.

Pottsville in the northern rivers region was battered with close to 605mm of rain, while the central tablelands copped 631mm since Wednesday.

The rain has impacted parts of drought-stricken NSW including the northwest slopes, where up to 100mm of rain fell in the past few days.

“That’s more rain than they have seen in quite a few years,” Golding said.

While the rain has been welcomed by many drought-affected communities, Golding said follow-up rain was needed to make a difference.

The Central Coast, Sydney, and the Blue Mountains were also soaked after receiving between 200mm and 400mm of rain from 9 a.m. Friday to 5 p.m. Sunday.

Strong winds also wreaked havoc on the coast where waves peaked at up to 10m and high tides caused extensive flooding and erosion.

Residents near the Narrabeen Lagoon in northern Sydney were evacuated overnight after warnings of significant flooding. It is now safe to return.

Four people were hospitalised on Sunday afternoon after a tree fell on their car in the Sydney CBD, and a 16-year-old boy was treated for broken ribs after being trapped between debris in the Hunter’s Allyn River.

Water from the Georges River was also inundating Milperra and Liverpool in western Sydney early on Monday, the NSW State Emergency Service said.

River levels at Milperra are now higher than during the 1988 flood and major flooding is impacting other areas such as Warwick Farm and Chipping Norton.

Utility companies are rushing to restore power in swamped regions, with more than 85,000 Ausgrid customers—primarily in northern Sydney and the NSW Central Coast—without power on Monday afternoon.

Endeavour Energy has more than 16,000 customers without power.

The NSW SES responded to about 10,000 calls for help and carried out multiple rescues of people trapped by rising rivers and floodwaters.

A significant landslip in Leura has closed the Blue Mountains line west of Springwood to Bathurst and is expected to be closed for several days, he added.

The rain on Monday moved to the state’s South Coast where up to 150mm had fallen and is heading towards Victoria.

Severe thunderstorms are expected to cause havoc and bring intense rainfall to much of NSW throughout the week.

Sydney’s parched dams are filling up with Warragamba dam at more than 60 percent capacity after jumping from about 45 percent last week.