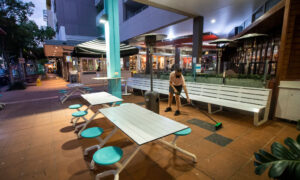 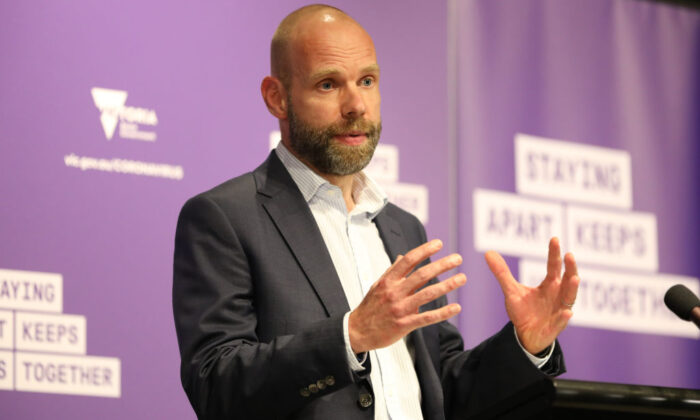 Four of the new cases are residents on the third floor of the Ariele Apartments in Maribyrnong, which has been in lockdown since Monday night after a visit from infected removalists.

Among those cases is a man in his 60s, who subsequently infected his parents, aged 89 and 90.

The man also attended an AFL match between Carlton and Geelong on Saturday and Highpoint Shopping Centre on Friday.

COVID-19 Commander Jeroen Weimar urged anyone who has visited an exposure site or has symptoms to get tested.

“The next two days are particularly critical,” he told reporters on Wednesday.

“We are right on the heels of this particular outbreak.”

Some 200 residents of the Ariele Apartments were forced into 14 days of quarantine after a group of NSW removalists did a pick up at the complex on Thursday while infectious.

Weimar confirmed the three removalists, two of whom have tested positive, weren’t wearing masks, in a breach of their workers permit conditions.

The trio also did a drop off at a Craigieburn home the same day and visited several petrol stations and fast-food restaurants, which have been listed as tier-one exposure sites.

It is believed they slept in their trucks on Thursday night before travelling to SA.

A remaining new case is a man in his 30s who attended Coles Craigieburn at the same time as a member of a family who recently returned from Sydney infected with COVID-19.

Three members of the family flew into Melbourne on July 4, while a fourth drove back on Thursday.

The family had red zone permits to return to Victoria, meaning they have been required to self-isolate at home since their arrival.

One family member, however, visited Coles Craigieburn and a Metro petrol station in Broadmeadows, the latter a tier-one exposure site.

After initially testing negative when they first returned, all four have since tested positive for COVID-19.

The seven new cases will be included in Thursday’s daily figures.

It comes as a war of words has broken out between the state and federal governments over financial support for NSW.

The package will be jointly funded by the Commonwealth and NSW and offered to other states and territories if they have to impose extended lockdowns.

Treasurer Josh Frydenberg told ABC’s 7.30 program people were “sick” of Mr Andrews’ “whingeing and his politicking of the crisis”.

“We’ve put in place a system with NSW that can be extended and expanded to other states should they incur a lengthy lockdown,” he said.

“What we’ve seen in regards to NSW are support and comfort … that’s what should’ve happened here as well, rather than the extreme politicisation, the finger-pointing and the blaming that was going on from the federal government,” he said.