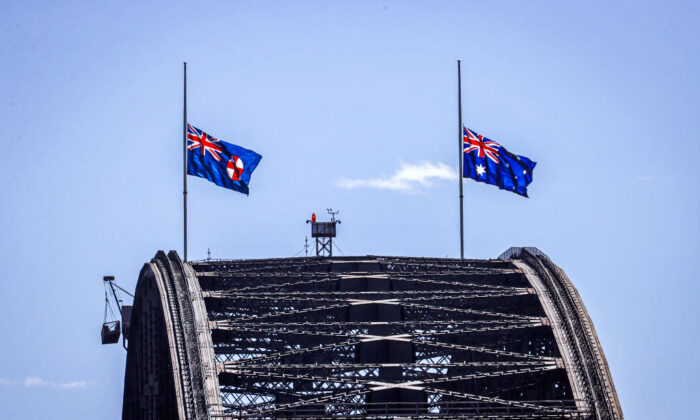 The flags atop the Sydney Harbour Bridge fly at half-mast to mark the death of Prince Philip, Duke of Edinburgh, on April 10, 2021 in Sydney, Australia. (Photo by David Gray/Getty Images)
Australia

Several Sydney-based manufacturers have suggested they could add the Aboriginal flag to the Sydney Harbour Bridge for a cheaper price after the New South Wales (NSW) government revealed the installation would cost taxpayers A$25 million.

NSW Premier Dominic Perrottet on Monday admitted that he was stunned by the A$25 million price tag, which he described as a “pretty ridiculous and outrageous cost” that “doesn’t seem to pass the pub test.” However, Perrottet refused to share further details of the plans or how many quotes the government received.

“The advice that I have received has been that it’s complex, that there are heritage concerns; obviously all the poles will need to be replaced, and all three of them are the equivalent size of a six-story building, so I accept that it’s not a simple process and it’s not a simple construction,” Perrottet told 2GB radio.

“When this came through once again, I was surprised by it, and I will be sitting down and going through line by line to make sure the taxpayers of NSW get value for money.”

Sydney-based flag pole installer Ray Haynes told 2GB on Tuesday: “Without seeing all the paperwork, I went online saying I would do it under 10 million.”

Meanwhile, flagpole company Poseidon Poles and Flags told The Daily Telegraph that replacing the three poles on the Harbour Bridge would cost $650,000 while replacing each pole would cost between $175,000 to $200,000.

Sydney-based manufacturer Goldspar estimated that putting a regular 20-metre pole on the world-famous landmark would cost between $30,000 to $40,000. The company noted that traffic control and closing the bridge could be a factor behind the staggering price.

It comes after Aboriginal advocate Cheree Toka called to put the Aboriginal Flag on the Sydney Harbour Bridge permanently alongside the Australian and the NSW flags to “acknowledge and celebrate” the Aboriginal culture. Toka’s petition on change.org has gathered over 177,000 signatures by Tuesday.

The move, however, was described by One Nation Leader Mark Latham as “empty symbolism” that ignores real problems facing the Aboriginal community. He also criticised the “Liberal-Labor-Green alliance” for “washing taxpayers money down the drain for no tangible purpose.”

“In Walgett, the Indigenous-run government school is so violent and dysfunctional that families are leaving the town, while others are bussing their children an hour to Lightning Ridge,” he wrote in a Facebook post on Monday.

“In places like Bourke and Wilcannia in Western NSW, the police work on the assumption that every Indigenous child over the age of 5 has been sexually abused.”

“These are the real-life tragedies destroying young Aboriginal lives, not the absence of a flag on a bridge.”

“These are the problems that need fixing, not the empty symbolism of a flag only the inner-city harbour elites can actually see.”