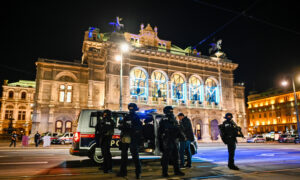 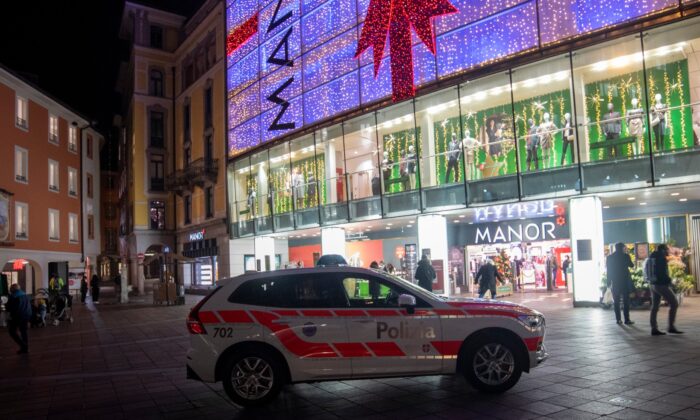 A police car in the area where a stabbing occurred in the department store, in Lugano, Switzerland, on Nov. 24, 2020. (Ti-Press/Keystone via AP)
Europe

GENEVA—Swiss authorities are investigating as a possible terrorist attack the stabbing of two women in a department store in the southern city of Lugano, for which a suspect has been arrested. Police said the women’s injuries were not life-threatening.

Swiss federal police said on their Twitter feed that an attack “presumably of terrorist motivation” took place in the Italian-speaking city of Lugano on Tuesday afternoon, and federal prosecutors were investigating.

The federal prosecutors’ office said that “an alleged terrorist attack against several people in a department store” had taken place.

Police in the southern Ticino region, which includes Lugano, said a 28-year-old Swiss citizen living in the Lugano area had allegedly attacked two women, wounding one person in the neck with a sharp weapon.

In a statement, the Ticino police said one of the victims sustained serious but not life-threatening injuries, while the other had minor injuries.

Catherine Maret, a spokeswoman for the federal police, said the suspect was known to police and had “appeared recently in police investigations with regard to terrorism”—specifically jihadism. She declined to comment further.

She declined to comment on Swiss media reports indicating that the attacker shouted “Allahu Akbar”—God is great—during the incident.