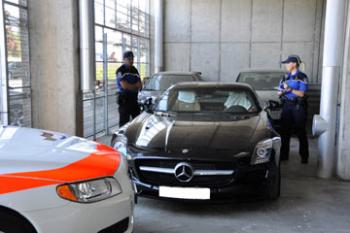 Chowa Cho
View profile
Follow
biggersmaller
Print
On Friday, Swiss police arrested a Swedish man for speeding at a record 290 kilometers per hour (about 180 mph) on the highway. The traffic offender awaits his penalty, according to a statement released by the police of the Fribourg region on Aug. 9.

Meanwhile, both his license and car have been confiscated. The 37-year-old Swede was driving a Mercedes-Benz when caught by a traffic enforcement camera on the A12 highway between Bern and Lausanne.

The police arrested him shortly afterward. After identifying and questioning the man, the police released him.

The magistrate ordered his car confiscated, in case a technical investigation is required, and to secure the collection of his fine, according to police.