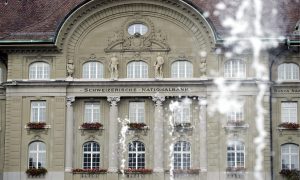 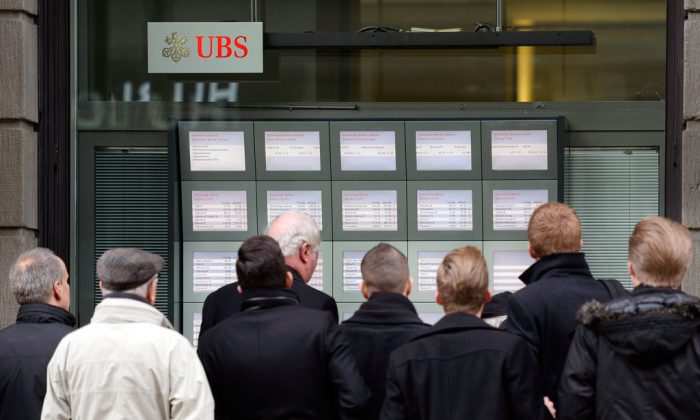 People follow the development of courses in Zurich after the turbulence at the stock exchange, pictured Thursday, Jan. 15, 2015. (AP Photo/Keystone, Walter Bieri)
Business

Swiss Franc’s Staggering Ascent to Be Felt Far and Wide

LONDON—A 30 percent swing in a blink of an eye is not uncommon in the stock market. In the world of currencies, it can seem as rare as Halley’s Comet.

But that’s what happened to the Swiss franc on Thursday — a stunning move that is likely to hurt the Swiss economy, inject uncertainty in financial markets and even darken the global outlook.

Within minutes of the Swiss National Bank’s announcement it was ditching a policy to limit the rise of the currency, the franc had rocketed by about a third against the euro and the dollar. Unprecedented, said analysts.

Though it has since shed some of those gains, the Swiss franc remains sharply higher and that spells a host of problems.

The stock market said it all. Shares on the Zurich exchange have fallen another 6 percent Friday following the previous day’s 9 percent slump. That’s a clear indication investors have taken fright at the worsening outlook for Switzerland’s exporters and economy.

According to Morgan Stanley, 85 percent of Swiss company sales come from outside Switzerland. Corporate giants like food maker Nestle and drug maker Novartis make almost all their money in foreign markets.

A stronger franc also makes the country, which features some of the world’s finest ski slopes, more expensive to visit. It’s unlikely, however, to dent the plans of the world’s executives and government leaders as they gather next week at the World Economic Forum in the ski resort of Davos.

The picture is potentially bleak on another economic front. As in the eurozone, prices in Switzerland are already falling modestly and there are fears that may turn into a sustained decline, so-called deflation, as a stronger currency makes imports cheaper and depresses economic activity.

Falling prices may sound good in principle, but when sustained they can choke the life out of an economy by encouraging consumers and businesses to delay spending in the hope of bargains down the line.

Thursday’s staggering rise in the Swiss franc had an immediate impact on trading around the globe.

Holders of Swiss francs made heaps of money. Many investors and brokerage firms, though, have been knocked sideways. Already two brokerage firms, London-based Alpari and New Zealand’s Global Brokers NZ, have announced they have suffered catastrophic losses and will have to close down. FXCM, a New York-based currency broker, has also warned that it “may be in breach of some regulatory capital requirements” after its clients experienced significant losses. On Friday, FXCM said it was getting a $300 million rescue loan from financial firm Leucadia National Corp.

Whatever else happens, for many in the markets Switzerland’s move belies its image of a safe and reliable place to invest money.

“The once-assumed ‘safety’ of the Swiss franc is eradicated,” said James Stanton, head of foreign exchange at deVere Group, which has 80,000 clients globally.

As a result of the Swiss bank’s decision, the euro has lost one of its main buyers. Many analysts think that could further pressure Europe’s single currency, which is already near decade-lows against the dollar.

“Surrendering its commitment toward the cause has provided yet another indication to the markets that the euro is going to continue the decline,” said Jameel Ahmad, chief market analyst at FXTM.

The 19-country eurozone economy, plodding along with anemic levels of growth, is likely to welcome that with open arms. The falling euro would help eurozone exporters and potentially nudge inflation back up from dangerous lows.

The Swiss franc’s move is the latest in a string of market developments, such as the collapse of the Russian ruble and the dramatic fall in oil prices, that have fueled concerns over the outlook for the world economy.

Volatile markets make it more difficult for businesses, politicians and investors to plan ahead. A global company that wants to do business with a Swiss company, for example, will have seen the value of its contracts swing sharply this week.

In the face of such market jitters, business leaders and policymakers are left scratching their heads trying to work out what all the wild moves are saying.

There’s a lot to discuss in Davos next week.