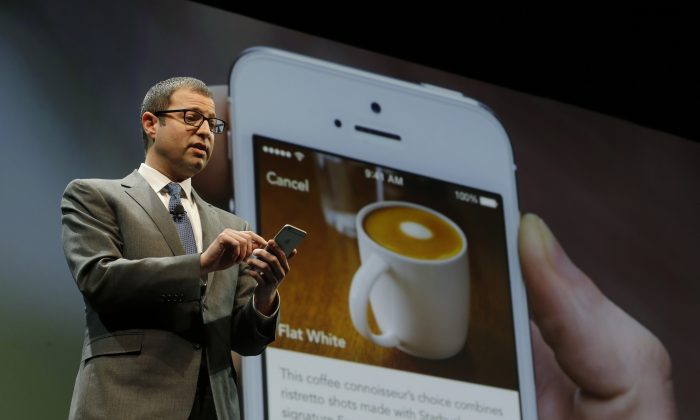 “Software is eating the world,” venture capitalist Marc Andreessen declared in 2011. His metaphor, meant to sum up the displacement of brick-and-mortar businesses like taxi services and retail bookstores by tech companies like Uber and Amazon, has now come back full circle as software is now poised to transform the food and dining industry.

This week, Starbucks unveiled plans for a trial delivery service in two locations starting in the second half of 2015, partnering up with the delivery startup Postmates in Seattle, and deploying its own employees to carry lattes upstairs to customers in the Empire State Building.

“The truth is we’re not sure exactly how it will play out,” Adam Brotman, chief digital officer at Starbucks, told Re/code. “Is one the national approach and one for dense urban environments only? We are truly in learning mode right now, but we’re excited about them both.”

Established multinational corporations are not known for their technological prowess, and the four-decades-old coffee giant is no exception. Starbucks’s entry into the delivery market was likely not motivated by the drive for innovation seen at Amazon or Apple, but the fear of being left behind.

Ordering Food From Your Phone

The food e-commerce sector has seen explosive growth in the past few years, much of it fueled by the growth of app-based food delivery companies like GrubHub Seamless, which saw the number of active users grow from 3.4 million to 5 million between December 2013 and 2014. Analysts expect to see similarly high rates of growth in the next few years as well.

Morgan Stanley’s Dean Prissman wrote in February that consumer awareness about Grubhub is still low relative to the number of people who use food delivery services, and that GrubHub’s low transaction costs could mean a fivefold expansion of its user base in the near future.

“The progression of similar businesses supports our case for significantly higher adoption rates,” Prissman wrote. “For instance, Just Eat PLC, a comparable business to GrubHub with a leading position in the U.K. and Denmark, has already achieved addressable population adoption rates well in excess of GrubHub at 14 percent for the U.K. and 39 percent in Denmark.”

Meanwhile, leading indicators suggest that the app-delivery services could be in the same place now that Uber and Lyft occupied a few years ago, when they were derided as impractical luxury services for the rich. Now, in many cities they’re every bit as mainstream as taxi services.

Five delivery startups in the Bay Area alone raised nearly $83 million in venture funding in 2014, including Postmates, which picked up another $35 million just last month. Some of these companies, like Sprig and Spoonrocket, are vertically integrated and deliver food they make in-house, while most partner with select restaurants.

The concept of tech-based food delivery isn’t new, and the idea has already gone through one cycle of trial and failure in Silicon Valley. Kozmo.com and Webvan were both food delivery startups founded in the late ’90s that both blew up in the ensuing burst of the tech bubble in 2001. Kozmo had originally promised one-hour delivery on everything ranging from books to DVDs and yes, Starbucks coffee.

Fourteen years later, the universality of smartphones makes food-delivery services a much more viable business than it was in the late ’90s, and the general public is much more accustomed to ordering things on their devices as a result of years of habituation.

“Whenever something was possible faster, we rarely ever went back and said we’d like something slower. Google trained us for 15 years that a faster search is a better search. Amazon did their best to reduce their Amazon Prime deliveries from five days to two-to-three days. … having fast access to goods is super appealing to customers,” Postmates CEO Bastian Lehmann recently told Eater.com

As customers become more accustomed to convenience, the products themselves are being changed to optimize for the delivery process. Lehmann has already discussed the possibility of changing the Starbucks cup to improve it for delivery.

The advent of radio transformed not only how music was distributed, but forced music producers to manufacture 3- to 5- minute hits that were optimized for the specific medium. The need to place advertisements in between scenes is a fundamental part of how TV scripts are written. And now, some food delivery companies have already customized their items for the delivery process.

For instance, the delivery startup Munchery’s makes dishes that are delivered cold to the customer, with instructions attached on how it should be reheated in the microwave or the oven. For now, reheated coffee remains the objection of derision and scorn, but who knows? Compared to Elon Musk’s dreams of colonizing Mars, delicious, reheatable coffee comes off as mundane in comparison.