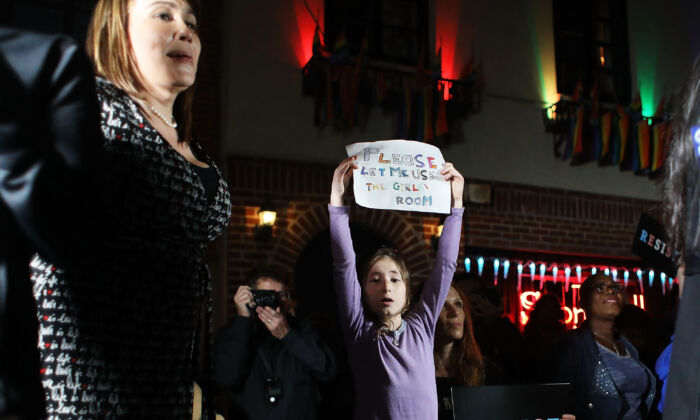 Activists and members of the transgender community protest a Trump administration announcement that rescinds an Obama-era order allowing transgender students to use school bathrooms matching their gender identities, at the Stonewall Inn in New York on Feb. 23, 2017. (Spencer Platt/Getty Images)
2022 Midterm Elections

The majority of Americans do not support transgender surgeries or anti-puberty blockers for minors, according to a new survey (pdf) released by Washington-based conservative think tank American Principles Project (APP) on May 12.

Recent findings show that 56 percent of voters in swing states support banning puberty blockers, cross-sex hormones, and physical sex-change surgeries for children under the age of 18 who identify as transgender—including 46 percent who strongly support the proposals.

Among the 34 percent of respondents who said they opposed the ban, over half identified as Democrats, 26 percent as Independents, and 20 percent as Republicans.

When it comes to whether they agree on or stand against pushing children into gender transitioning, 63 percent of respondents reckoned those under 18s are too young for such a decision that they may regret it later in life, while 22 percent believe that opposition is transphobic and bigoted.

“The truth is that these are commonsense views held by most Americans, even in highly competitive battleground states,” said Terry Schilling, president of APP, in a Thursday press release.

The survey polled 1,200 likely voters in six Senate battleground states, including Arizona, Georgia, Nevada, New Hampshire, Pennsylvania, and Wisconsin. It asked voters during the past week about a number of hot-button issues, including women’s sports, sex changes for children, and parental rights bills like the one recently passed in Florida.

According to the result, people largely trend toward a new law signed by Florida Republican Gov. Ron DeSantis, which prohibits public schools from teaching sexual issues, such as gender identity or sexual orientation, to children in kindergarten through third grade. Sixty percent said they support the move versus 34 percent said they opposed it.

The battleground survey, conducted by consulting firm OnMessage Inc. via telephone, declared a margin of error of 2.82 percentage points.