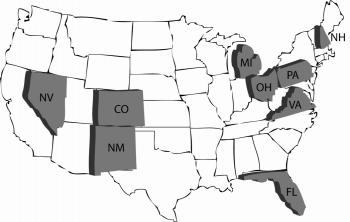 Swing States: What’s Up for Grabs in the U.S. Election?

Forty days to go and nine key states to win.

Traditionally, Democrats and Republicans have had strongholds among a few predictable states: New York, Illinois, and California for the Democrats, and most of the Southeast and Texas for Republicans. But in every election, there are several states that could make or break it for either candidate. Here are the nine states most widely regarded as the 2008 election’s swing states:

No Republican president has won an election without carrying Ohio. Its 20 electoral votes make the state a campaign magnet. In 2006, Democrats took control of Ohio’s governorship and won a Senate seat. Obama should be taking advantage of the shift, but is struggling with Ohio’s blue-collar, working-class voters.

Like Ohio, Pennsylvania’s blue-collar voters are responsible for most of the electorate. Even though Obama lost in the Democratic primary to Sen. Hillary Clinton, he has tilted Pennsylvania in his favor, but only holds a slim lead. Obama’s VP Joe Biden and his ties to Pennsylvania should help Obama.

The center stage of the 2000 election’s debacle between George W. Bush and Al Gore has resurfaced as a tough swing state this year. Florida’s Hispanic population makes up a large portion of the voter bloc. Hispanics nationwide favor Obama by a margin of more than 20 points, but in Florida, Obama faces an almost double-digit deficit among more conservative Florida Hispanics.

Because Michigan’s Democratic primary results were invalidated after the state held its primary too early, Obama didn’t campaign vigorously in Michigan, missing his chance to attract voters in this Rust Belt state. Democrats may still be bitter after their voice of support for Hillary Clinton was ignored, but McCain has been slow to swoop up any Democratic deserters.

If any Southern state were to go Obama’s way, it would be Virginia. A state that has voted Republican for decades, Virginia political stance has slowly scampered to the left, leaving Obama with a legitimate shot at stealing its 13 electoral votes. McCain started off as the forerunner, but the Black population in Northern Virginia could swing the state to be a blue state.

Hispanics are growing in large numbers in Nevada, but like in other Western states, have bucked the national trend of voting for Obama. The Democrat has struggled to win them over, but the traditionally close results of past elections show that Nevada could go either way this election.

McCain rejuvenated his half-dead campaign after a primary win in New Hampshire. The large number of independents in the Granite State have been approving of McCain.  McCain, who has been painted as a Maverick, seems a natural fit for the state whose motto is “live free or die.”

Neighbor to John McCain’s home state of Arizona, New Mexico has been the site of excruciatingly close results the past two presidential elections: Both Bush in 2004 and Gore in 2000 won by a margin of less than 1 percent. McCain would like to see New Mexico fall into his lap, as Hispanics there have only offered Obama lukewarm support.

The Democratic National Convention was held in Denver this year, and Obama’s grandiose speech in front of 80,000 at Invesco Field didn’t hurt. Trends show the state shying away from voting Republican, and Colorado could make a dent in McCain’s plan to win most of the Mountain West.

*Poll numbers collected from RealClearPolitics and are accurate as of Thursday, September 25.