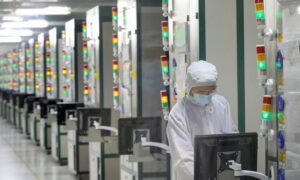 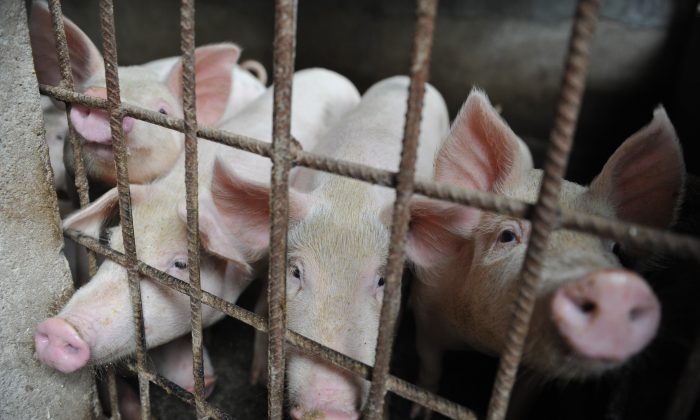 Pigs are seen in a hog pen in a village in Linquan county in Anhui Province, China on Aug. 31, 2018. Reeling from rising feed costs in Beijing's tariff fight with Washington, Chinese pig farmers face a new blow from an outbreak of African swine fever that has sent an economic shockwave through the countryside. (Chinatopix Via AP)
China Business & Economy

BEIJING—Chinese pig farmers, already reeling from rising feed costs in Beijing’s tariff fight with Washington, face a new blow from an outbreak of African swine fever that has sent an economic shockwave through the countryside.

First detected in August, the disease has killed 1 million pigs, prompting authorities to restrict shipments of most of China’s 700 million swine, even though nearly all are still healthy. That has disrupted supplies of pork, China’s staple meat, to big cities while prices collapsed in areas with an oversupply of pigs that farmers are barred from shipping to other provinces.

“I can only manage to break even at the current price,” said a breeder on the outskirts of Shenyang, northeast of Beijing, where the first case was reported Aug. 3. She said she was rearing about 100 pigs and would give only her surname, Yan.

“Unless we see a higher price for pigs, all my work this year would have gone for nothing,” Yan said.

African swine fever doesn’t affect humans but is highly contagious in pigs, making it a serious threat to farm areas.

On Nov. 23, the first cases were reported in Beijing, the capital. Authorities said a total of 86 pigs at two farms in suburban Fangshan district died.

Also Friday, Xiamen Airlines, a mid-size Chinese carrier, announced it was suspending use of pork in in-flight meals.

The outbreak adds to a swarm of challenges for Chinese leaders as they grapple with the U.S. over Beijing’s technology policy and try to shore up cooling growth in the world’s second-largest economy.

“Farmers have been losing money in pig-breeding provinces for the past couple of months and their confidence has been shattered,” said Feng Yonghui, chief analyst of soozhu.com, a pork industry consultant.

American farmers supplied about one-third of China’s imports of 96 million tons of soybeans last year, while its own farms produce about 15 million tons a year.

Soy prices have risen by as much as 4 and 5 percent per month since then in some areas.

Importers are buying more soy from Brazil and Argentina, the other major exporters. Authorities have encouraged breeders to look at other protein sources such as canola.

Since the first swine fever case in August, sick animals have been found in areas from Jilin Province in the northeast to Yunnan on China’s southern border with Vietnam.

Authorities responded by banning shipments of all pigs from any province with one case.

Authorities have found 73 outbreaks in domestic pigs and one infected wild boar in 47 cities in 20 provinces, according to an Agriculture Ministry official, Feng Zhongwu.

“The task of prevention and control is still very arduous and the work is extremely urgent,” Feng said at a news conference Friday.

It wasn’t clear how the virus reached China but it was found to be genetically similar to versions in Russia, Poland and Georgia, said another official, Huang Bao. Huang said genetic testing showed the virus in the wild boar in Jilin Province was unrelated to that in domesticated pigs.

A big share of China’s population still depends on farming even after the country became one of the biggest manufacturers. The share of the workforce employed in farming has fallen to 18 percent from more than 50 percent two decades ago, according to World Bank data, but farm households still account for 250 million people.

The southwestern province of Sichuan, which accounts for some 10 percent of Chinese pork production, reported its first case last week. That extended swine fever’s reach to all major Chinese pig breeding areas.

With Sichuan included, restrictions on the movement of pigs now extend to some 90 percent of the Chinese industry’s animals, according to Feng of soozhu.com.

“The impact of the government policies is bigger than the epidemic itself,” Feng said.

In the northeast, the ban has led to a pork glut in markets, pushing down prices by 20 percent compared with three months ago, according to state media. Meanwhile, retail prices have jumped 30 percent in Chongqing, a city of 9 million people in the southwest.

The outbreak could cause longer-term disruption if farmers respond by raising fewer pigs next year, leading to shortages and higher prices.

“Farmers and consumers may panic and cause greater damage to the pork industry,” he said.

The government maintains stocks of frozen pork in case of shortages but has yet to say whether any will be released this year.

Yan, the breeder in Shenyang, said she will skip buying piglets to rear this year but will keep sows to produce more.

“Even doing that is difficult because it is hard to keep these baby pigs alive,” she said.