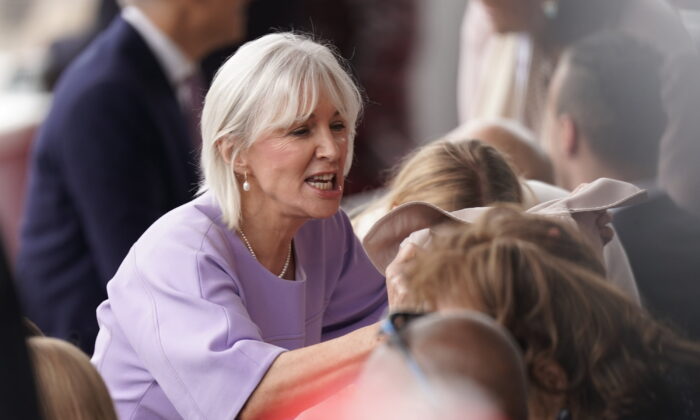 Dorries also said she’ll “encourage other sports” to do the same and suggested creating a separate category for transgender athletes.

The International Swimming Federation (FINA) said on June 19 that it will only allow biological male swimmers to compete in women’s events if they “have not experienced any part of male puberty beyond Tanner Stage 2 or before age 12, whichever is later,” and “have since continuously maintained their testosterone levels in serum (or plasma) below 2.5 nmol/L.”

Asked to comment on the decision, Dorries, the UK’s secretary of state for digital, culture, media, and sport, told LBC that it was “absolutely the right decision.”

“And I am going to encourage other sports,” she said, noting that her department recently developed a new policy on the issue and is about to “have a round table with all of the sports governing bodies.”

Dorries said FINA’s decision reflected an opinion that she has held “for a long time.”

“It is just unacceptable that trans women compete in women’s sport,” she said. “If you have been through puberty, then you cannot reverse the size of your feet, the length of your femur, the density of your bone, your muscle strength, the size of your hand; there is nothing that you can reverse once you’ve been through puberty. I would just say the fairness should always trump inclusion as a principle.”

The minister also said she believes that it’s “important” that transgender athletes can compete in a fair way, suggesting that “they should be able to compete in their own category.”

A report published on June 16 suggested that a majority of the British public opposed trans women in female sports, with many considering it a “red line.”

Almost three in five (57 percent) of 3,140 respondents said a trans woman shouldn’t be allowed to take part in women’s sporting events, while 19 percent said they should be allowed. A quarter of the respondents didn’t have an answer.

A recent poll from the United States found similar results.