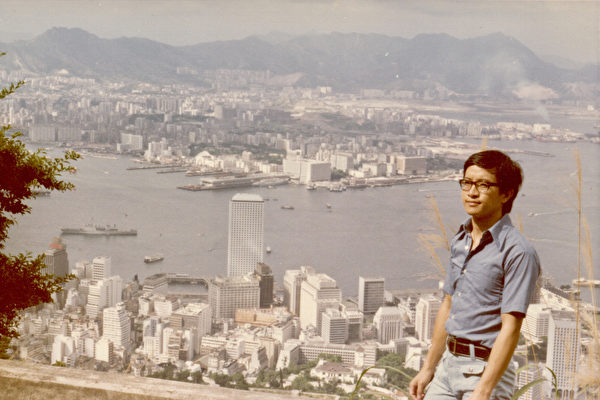 Kent Wong, who swam to Hong Kong, stands at the top of Victoria Peak in Hong Kong in 1975. (Provided by Kent Wong)
Chinese Regime

Swim to Freedom: An Anesthesiologist’s Journey

Once a refugee, now a retired anesthesiologist, Kent Wong tells his remarkable story in “Swimming to Freedom: My Untold Story of Escaping the Cultural Revolution,” released on April 27. He says he wants to prevent history from repeating itself.

He recently shared his thoughts on writing the book with the Chinese edition of The Epoch Times.

Ten years ago, Wong woke up thinking about a friend who died in a first attempt to swim from China to Hong Kong, “I think this history must be known by everyone, because many people died in the escape … So I feel a responsibility in my heart, I have to write this book,” Wong said.

A History to Remember

Originally, the book was intended for Western readers, but an American-born Chinese reader changed Wong’s mind.

The reader told him, “I knew it from the first page. This is a book I have wanted to read for many years. My dad also escaped over water, but he never said anything about it. After reading this book, I can now understand my dad.” Hence, the Chinese language edition of the book is now available (TouDuFan.com).

Wong said, “Studying history and [the] trials and tribulations of the past would serve as an insight into the Chinese communists’ essence that remains unchanged to date. I believe that, despite continuously embellishing with different forms, evil is in the regime’s DNA.”

Wong said,” Every campaign of the regime brings disasters.”

Wong’s father, a Chinese patriotic official in the Hong Kong Customs office, joined an insurrection at work, left Hong Kong, and returned, with his family of five, to the newly established Communist China when Wong was a young boy in 1951.

When the Anti-Rightist Campaign was launched in 1957, Wong’s father, once hailed as a hero, was classified as a Rightist for his criticisms.

Wong and his sisters have since been classified as enemies of the Revolution. They are one of the “Five Black Categories:” landlords, rich farmers, anti-revolutionaries, bad-influencers, and right-wingers.

The family therefore became second-class citizens who were sent to a rural farm to raise chickens in Guangdong Province in 1959.

During the Cultural Revolution (1966-1976), in 1968 hundreds of thousands of educated Guangdong youth escaped to Hong Kong.

Wong found himself having lost hope for the future, especially after witnessing the regime publicly execute 21 prisoners, mostly counter revolutionists. That horror strengthened his determination to become a stow away.

Wong recounted the scene: Soldiers held a pistol against each prisoners’ temple, and a rifle to their back, aimed toward the heart. The prisoners fell dead immediately after soldiers fired their guns.

Wong said, “Like all my friends who stowed away, I lost hope for China and decided to risk my life for a better future.”

Wong tried three routes to escape and failed twice. After two years of attempts, and going through a string of hardships, dangers, torment, and setbacks, he eventually left China and sneaked into Hong Kong by swimming the sea at the end of 1973.

Wong came to the United States as a political refugee and enrolled at Harvard Medical School in the summer of 1975.

Wong said, “All my Harvard Medical School classmates gave me a standing ovation when I obtained U.S. citizenship in 1982.”

Wong graduated from Harvard Medical School and became a certified anesthesiologist in 1983. His entire family came to the United States in 1984.

The 30-Year Exodus to Hong Kong

According to Wong, among the 16 people who tried to escape to Hong Kong, including Wong and his sister, three died during their attempt.

The former executive editor of Open Magazine Tsoi Wingmui, who immigrated to Hong Kong in 1980, once wrote in an article,  “About half of the 7 million people in Hong Kong today are refugees who fled the tyranny of communism and the Great Famine after 1949, and their descendants.”

Wong made multiple visits to Hong Kong after moving to the United States in 1975. He witnessed students who protected themselves with umbrellas from police tear gas during the Umbrella Movement that opposed the Beijing regime’s decision to subvert the universal suffrage that Hong Kong was promised in the Basic Law.

Wong said that Hong Kongers are patriotic and supportive of students taking to the streets to protest Beijing’s violation of the Basic Law.

According to Wong, before the founding of communist China, the economic development of Guangzhou, Guangdong Province, surpassed that of Hong Kong.

Hong Kong’s economy picked up under a free market system and became a contributor to Chinese mainland economic growth. Sadly, the glory that Hong Kong once had has vanished.

Now, the Beijing-imposed National Security Law, with devastating consequences for human rights, has caused a mass exodus of Hong Kongers from the island.

“I see Hong Kong as a paradise, but I have lost her forever. This breaks my heart,” Wong said.

Wong said that he recognized the evil nature of communism by listening to the Voice of America broadcasts during the Cultural Revolution.

In China, the populace was fed communist propaganda that was the only source of information at the time. The Chinese Communist Party (CCP) brainwashed Chinese people into becoming docile with rigid thinking and mindless submission to dictatorship.

Wong said, “The broadcasts did not hurl abuse at the CCP, but gave a rather rational analysis.”

Wong advised that the Chinese people should not be slaves to communist propaganda and should be able to exercise independent thinking, comparison, and rational analysis.

Wong said, “The truth dawns when people pursue it themselves.”