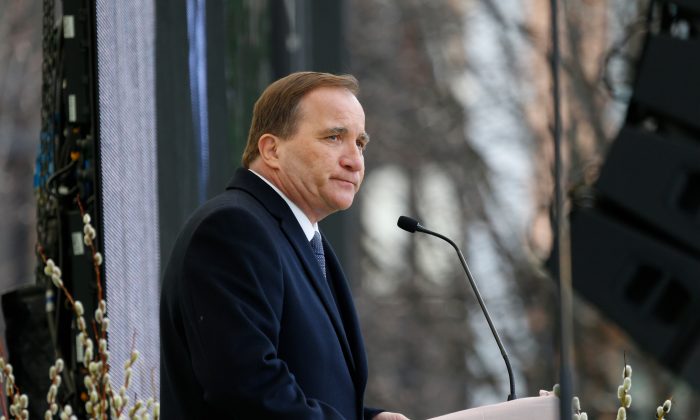 Prime Minister of Sweden Stefan Lofven gives a speech during a tribute to victims of Stockholm terrorist attack on the first anniversary on April 7, 2018 in Stockholm, Sweden. (Michael Campanella/Getty Images)
Europe

Historically Low Support for Swedish Social Democrats Ahead of Election

This means the stage is set for parliamentary uncertainty, as three seemingly incompatible parties of apparently equal size look to secure about 70 percent of the votes. If this happens on election night, one or more of the major players will likely need to do a radical about-face in order to form a government.

The Social Democrats are led by Sweden Prime Minister Stefan Löfven, who is currently in government in a coalition with the Green Party.

The other two parties in the running are the neo-liberal Moderate party, and the conservative/nationalist Sweden Democrats.

Polls vary, but after a big survey by Statistics Sweden (SCB), commentators have pointed out that it’s now hard to tell which party is the biggest.

In recent polls, the Social Democrats landed at around 24 to 25 percent, a far cry from the 31 percent they got in the general elections in 2014, which was already historically weak.

Locally, it’s even worse. In their traditional stronghold Gothenburg, Sweden’s second largest city, they are looking at a total collapse, possibly as low as 15 percent.

In a comprehensive survey by SCB, they achieved 28.3 percent nationally, but that particular survey is known to typically over-value the Social Democrats. In the last election, their actual result was 4 points below the SCB survey.

Regardless of the exact numbers, the Social Democrats are in crisis. Despite the booming economy, their ratings have plummeted. Polls indicate that they are bleeding voters to the Sweden Democrats as well as the former Communist Left Party, and most commentators cite the same factors: Some deeply unpopular policies of their Green coalition partners, rising violent crime, and their handling of the migrant crisis in 2015—particularly some baffling flip-flopping in the aftermath.

Recently, the party presented an uncharacteristically harsh migration policy. While apparently intended to stem the flow of voters to the Sweden Democrats, this move only seems to have succeeded in alienating left-leaning voters and pushing them to the Left party.

Just weeks later, the Social Democrat-Green government pushed through a heavily criticized bill—opposed by 60 percent of Swedes, according to a survey—providing a kind of amnesty for 9,000 young, male Afghan migrants, a large majority of whom are believed by authorities to have lied about being under 18 in order to gain special refugee status.

And while the Social Democrats—who not so long ago attracted some 50 percent of Swedish voters—are looking at a historically weak election result, the Green Party may lose their seats entirely. The Swedish parliament has a 4 percent bar, and the Greens are currently polling just above or below that, depending on the survey.

The parliamentary situation is now more uncertain than ever in postwar Sweden. The Social Democrats and the Moderates are long considered main opponents, and a “grand coalition” between the two would be a historical shock to the system.

The Sweden Democrats, meanwhile, are universally shunned by the other parties in Parliament—at least on a leadership level. Polls have shown that quite a few Moderate voters would like to see a collaboration with the Sweden Democrats, but their current leader, Ulf Kristersson, has ruled out any such deal. His own conservative/neo-liberal “Alliance” is widely regarded to be in tatters, however, with one party—the Christian Democrats—looking like they will fail to pass the 4 percent bar.

The crisis for the Swedish Social Democrats follows a general trend in western European politics over the last decade, in which several traditionally powerful social democratic parties have been almost obliterated, with Greece and the Netherlands being the most striking examples.