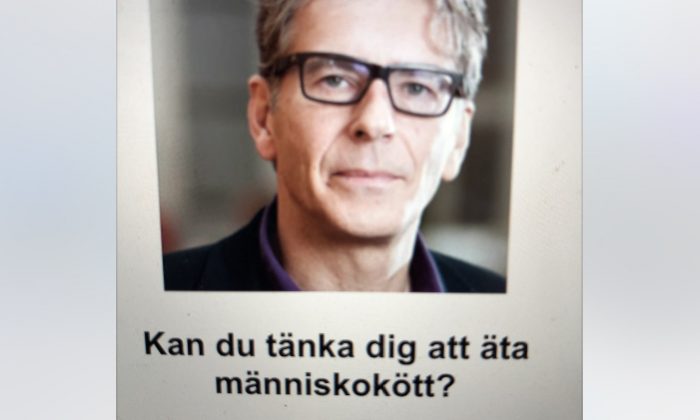 A screenshot from a T.V. program in which behavioral scientist Magnus Söderlund asks, "Can You Imagine Eating Human Flesh." (screenshot/Sweden Channel 4)
Viewpoints

Climate change alarmism has taken a macabre turn that looks like satire, but isn’t.

It happened in Sweden.

At a summit for food of the future (the climate-ravaged future) called Gastro Summit, in Stockholm on Sept. 3 to 4, a professor held a PowerPoint presentation asserting that we must “awaken the idea” of eating human flesh in the future, as a way of combating the effects of climate change.

In a talk titled “Can You Imagine Eating Human Flesh?”, behavioral scientist and marketing strategist Magnus Soderlund from the Stockholm School of Economics argued for the breaking down of ancient taboos against desecrating the human corpse and eating human flesh.

He refers to the taboos against it as “conservative” and discusses people’s resistance to it as a problem that could be overcome, little by little, beginning with persuading people to just taste it. He can be seen in his video presentation and on Swedish channel TV4 saying that since food sources will be scarce in the future, people must be introduced to eating things they have thus far considered disgusting—among them, human flesh.

Easier sells he suggests include pets and insects, but human flesh was the central topic. In Swedish articles describing this new debate, the term “mannisko-kotts branschen” is introduced. This means “the human flesh industry.”

In his bio at the Stockholm School of Economics, Soderlund states that his research focus includes  “consumer behavior,” “marketing stimuli,” “loyalty, emotions, justice perceptions,” “psychological reactions,” and “in a society increasingly obsessed with consumption.”

People can be “tricked,” Soderlund teases, into “making the right decisions.”

“Are we humans too selfish to live sustainably?

“Is cannibalism the solution to food sustainability in the future? Does Generation Z have the answers to our food challenges? Can consumers be tricked into making the right decisions? At GastroSummit, you will get some answers to these questions—and also partake in the latest scientific findings and get to meet the leading experts.”

In his talk, Soderlund asks the audience how many would be open to the idea. Not many hands go up. Some groaning is heard. When interviewed after his talk, he reports brightly that 8 percent of conference participants said they would be open to trying it. When asked if he himself would try it, he replies, “I feel somewhat hesitant but to not appear overly conservative … I’d have to say … I’d be open to at least tasting it.”

The logo for the talk, titled “Food of the Future: Worms, Grasshoppers, or Human Flesh,” features a splash of blood as part of the graphic design.

What Soderlund doesn’t mention, curiously, is the long documented science on the biological effects of cannibalism.

A tribe called the Fore lived in isolation in Papua New Guinea until the 1930s. They believed in eating their dead, rather than allowing them to be consumed by worms. This led to an epidemic of a disease called “kuru,” or “the laughing death,” caused by ingestion of human flesh. This disease wasn’t caused by a pathogen, but rather, a “twisted protein” (according to an NPR report) that tricks other proteins in the brain to twist like it, damaging the brain’s cerebellum. Researchers compared it to Dr. Jekyll’s transformation. The last victim of kuru died in 2009.

Whoever is in charge of Sweden’s public relations is doing an abysmal job. That’s unless the new brand is that this small Northern country—obsessed with atheism and political correctness—is now cooler than ever for resetting all previously known boundaries of “noir.”

Celia Farber is a Swedish-American writer with a background in magazine reportage and investigative reporting. She has written for Harper’s Magazine, Esquire, Rolling Stone, and many more, and is a contributor to The Epoch Times.