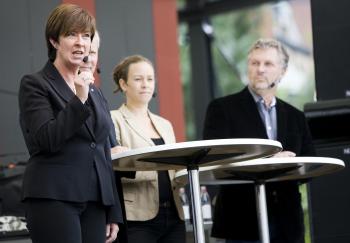 WAR OF WORDS: Speaking at a Stockholm rally on Sept. 12, the leaders of the the Social Democrats led by Mona Sahlin (L), the Left Party led by Lars Ohly (2nd L, behind Sahlin) and the Green Party represented by Maria Wetterstrand (2nd R) and Peter Eriksson (R), try to win undecided voters for their coalition in Sweden's Sept. 19 elections. (Jonathan Nackstrand/Getty Images)
Europe

Swedish Politics Becoming Similar to US and UK

Barbara Gay
View profile
Follow
biggersmaller
Print
GOTHENBERG, Sweden—The upcoming election for the Swedish parliament is, for the first time ever, a struggle between two coalitions—Socialist-Green abd Conservative-Liberal. Voters, however, are having problems discerning the differences between the two. While the tone between the party representatives on each side has been harsh—by Swedish standards—it has failed to stir the citizens.

On September 19, the Swedes will vote for representatives at the national, regional and municipal levels. To earn the right to sit in Parliament, a party needs to garner at least four percent of the national vote or 12 of the vote in a single voting district for that district’s seat.

The Swedish parliament had traditionally been dominated by the Social Democrats, a party that was a driving force in government for most of the post-war era, and up until a decade or so ago, the party still drew almost half of the Swedish vote. However, their share of the vote gradually declined to today’s approximate 30 percent. Prior to the last election, four conservative and liberal parties formed a coalition, which contributed to the weakening of the Social Democrats’ influence.

Social Democrats recently countered by forming the coalition with a smaller socialist party, the Left Party, and the Green Party, in order to have chance to achieve a majority. These two coalitions now account for 90-95 percent of all votes garnered, throwing a wrench into the normal gears of Swedish politics.

Thus, two large political camps now are pitted against one another, making politics in Sweden similar to that in the United States or the United Kingdom.

A populist, nationalist party may also squeeze past the four percent limit to become a decisive force between the two blocks in the new parliament, much to the chagrin of both sides, who constantly distance themselves from what they call a xenophobic, anti-Muslim and even racist party.