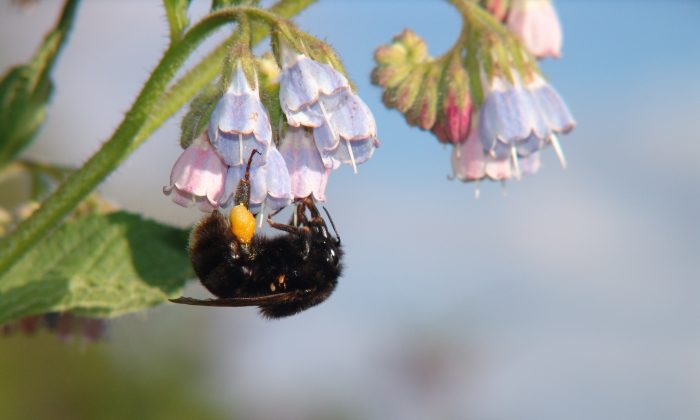 GOTHENBURG, Sweden—Some Swedes have been really protective of their bumblebees.

“I don’t think there will be any death threats this time,” said entomologist Bjorn Cederberg, who received death threats last spring when he announced he had allowed 100 short-haired bumblebees to be collected in southernmost Sweden and shipped to England.

British scientist Nikki Gammans, who worked with Cederberg, also received threats. Nonetheless, this spring she and her colleagues are back to collect 100 more young queen bumblebees as part of a project to reintroduce the species in England where it became extinct in 1988.

The short-haired bumblebee used to be a protected species in Sweden, which was the reason for the furor that led to death threats against the scientists. It was not commonly known, however, that the species was no longer threatened or protected in Sweden, so 100 queens would have very little effect on the total bumblebee population.

Once this was communicated to the public, things calmed down for Cederberg and Gammans.

“This is the first example of anyone re-establishing a previously existing bumblebee species, as well as trying to understand how to go about it in the best way,” Cederberg said. He used to work for the Swedish Species Information Center at the Swedish University of Agricultural Sciences, and has experience working with endangered species.

The short-haired bumblebee may be doing fine in Sweden, but there is cause for concern worldwide, as bumblebees and bees are in decline all over the world. In China, farmers have had to resort to manual pollination, Cederberg said.

Among the pollinating insects, bees perform 80 percent of pollination worldwide, which makes them critically important to global food production. For this reason, the European Commission announced on April 29 that it will ban three pesticides that are said to be killing European bees.

“I pledge to do my utmost to ensure that our bees, which are so vital to our ecosystem and contribute over 22 billion euros [$28.8 billion] annually to European agriculture, are protected,” European Union Health Commissioner Tonio Borg said after the vote, according to EUBusiness.com.

In Sweden, the work of bees was valued at $123 million (800 million Swedish kronor) in 2008, according to Cederberg. This does not include the berries and fruit found in private gardens or out in the wild. These would likely die out if the bees disappeared, along with many beloved flowers.

The pesticides are not solely to blame, however. Some years ago, Swedish farmers started harvesting hay before the red clover had bloomed. This was disastrous for bumblebees, which are dependent on red clover.

Cederberg suggests leaving some clover for the bumblebees during harvest, as the corners of the fields are difficult to reach anyway. It would save time as well as bumblebees, he indicated. Another way is simply leaving strips of unharvested clover and harvesting it later.

It is hard to say as yet whether the short-haired bumblebees that were shipped to England enjoy their new home. They arrived in Dungeness, Kent, to marvelous weather. Then came the rain, which is bad for the bumblebees, so they have been underground.

Establishing a new species is not without complications, he said. It is not simply a matter of moving a few individuals. Permits are needed, as well as a three-week quarantine. The queen bumblebees may not survive the quarantine, and may thus not establish new hives.

Last year, 50 bumblebees survived the transport and quarantine. They are about to have company.