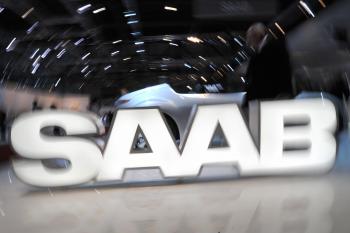 A logo of the Swedish car manufacturer Saab owned by General Motors is displayed during the 79th Geneva Car Show on March 3 in Geneva. Saab faces an uncertain future as its market share drops and parent General Motors struggles to survive. (Fabrice Coffrini/AFP/Getty Images)
Business

By Ivailo Anguelov
Print
Owned by struggling American General Motors, the Saab brand faces bleak times ahead, after GM submitted its restructuring plan to the U.S. Congress on Feb. 17 calling for selling, decreasing, or discontinuing some of its car brands.

The brands affected are Saturn, Hummer, Pontiac, and Saab.

Currently Saab is undergoing reassessment of its global business situation. GM wants to offer the company for sale in a plan to reduce its brands 25 percent by 2012, as reported in GM’s restructuring plan.

Prior to selling, GM is asking the Swedish government for financial support, but the Swedish authorities have refused lending financial aid to save the automaker.

If no agreement on Saab is reached by GM and the Swedish government, the brand will need to battle through the Swedish court system to declare bankruptcy, and be offered as an independent business for sales afterward. The decreasing demands for Saab automobiles, though, and the reported years of deep decline in sales, make the prospective of potential buyers slim.

As part of a future bankruptcy procedure, Saab will have to formulate a reorganization proposal concerning car design, engineering, and manufacturing in Sweden, to be presented to creditors within three weeks of the filing for bankruptcy.

If Saab fails to survive, thousands of employees in Sweden and U.K. may find themselves without a job.

As reported by experts, it is not unfeasible for Saab, which also manufactures other technologies, to become a profitable company again by implementing complete restructuring of its car line product.

Saab makes aircraft ground and onboard systems, defense and civil security communication systems, telecommunication infrastructure, and other systems and technologies.

On the brink of a possible shutdown, the need for restructuring for the Swedish automaker sounds even more plausible. As proposed by the Swedish trade minister Maud Olofsso, the company could change is business to begin manufacturing wind power towers and turbines.

This proposal is grounded in the current Swedish ambition to become a pioneer in the export of green technologies, even if it means reducing or eliminating its car industry.

Following this example in a more proactive manner, another Swedish carmaker, Volvo, a subsidiary of American Ford, has already started to make investment in wind-power systems in Sweden. This move will let Volvo keep its workforce in Sweden employed by moving or retraining it for a new production.

Ford asserts that will continue to support Volvo for the time being. What the future holds for Ford in the U.S. and for Volvo in Sweden is yet to be seen.

Saab was founded in 1937. Searching to diversify its business, the company established its automobile division in the late 1940s. Saab put its first car, the Saab 92001, on the market in 1947. In the 50s and 60s Saab was venturing into developing computer systems, and in 1971 developed its first aircraft onboard computer.

In the late 60s the company merged with the European truck manufacturer Scania-Vabis. It continued making trucks under the name Saab-Scania until 1995. GM bought 51 percent of Saab’s automobile division in 1990, and obtained the rest a decade later.

Even though they cannot do much to help the company, Saab enthusiasts and fans form all over the world have established an Internet forum—rescue-saab.com—for anyone who wants to learn about or help Saab. According to the website, there were nearly 15,000 registered “Saab Rescuers” 31 days after its launch.

Despite the uncertain future of Saab, the company continues to offer new models that integrate lower CO2 emissions and improved fuel economy to consumers.

It is difficult to predict whether the famous Saab brand will be able to find a major investor to bail it out and establish it as a new, independent company. Despite losing large market shares to other manufacturers offering fuel-efficient cars like the Toyota Hybrid series, Saab management says that it sees many opportunities in Europe that can help the company emerge from the current financial crisis.