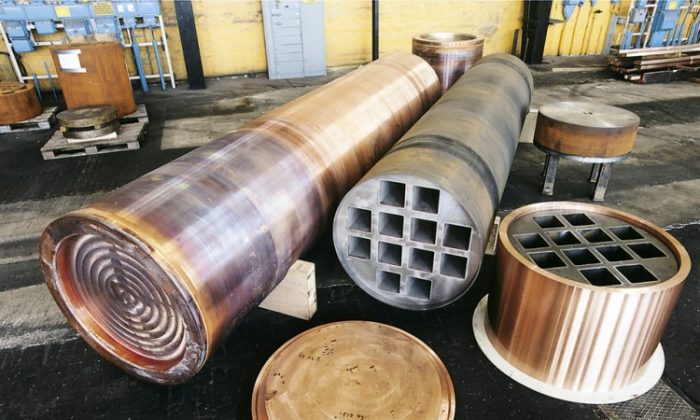 Parts of test canisters for storing nuclear waste in Sweden, which have been shown to erode to a dangerous point. (Courtesy of Swedish Nuclear Fuel and Waste Management Company)
Europe

Sweden’s solution for storing its nuclear waste suffered a setback recently. While experts are very active, driving the issue, they have failed to excite the interest of the general public.

In Sweden, the new plan for disposing of waste from nuclear power plants is to put it in copper canisters and store it in bedrock. Considering how dangerous the radioactive waste is, corrosion of these canisters is a major issue.

In late January, the Swedish Radiation Safety Authority reported that corrosion had occurred on small copper fragments they had put in oxygen-free water to test them. The report showed that the corrosion process does not stop at a certain point, as previously believed, but continues.

This was the latest setback for the waste-storage method, which has been widely criticized by experts. The news passed without much attention in Sweden.

The Swedish Nuclear Fuel and Waste Management Company (SKB) is responsible for all radioactive waste from Swedish nuclear power plants. Press officer Jimmy Larsson-Hagberg described the issue of storing nuclear waste into the unimaginably distant future as “a large puzzle. [There are] many equations, and many things to take into account.”

The copper canisters are deposited in individual holes in tunnels, some 1,500 feet down in the Swedish bedrock. Bentonite clay is used to embed the canisters to protect against corrosion and rock movement that could cause radiation leaks, Larsson-Hagberg said.

Professor Jonas Anselm at Linkoping University has studied the Swedish nuclear waste debate from 1950 to today, and he says the Swedish experts disagree on this matter.

“This criticism has been a very positive force to correct and develop solutions for the final repositories,” professor Anselm said.

Anselm explained that the general public is not very interested because the issue has become too technical and too difficult to understand.

Things were quite different a few decades ago, when Swedes were very passionate about different aspects of the nuclear issue, including the waste problem. The question of whether or not Sweden should keep its nuclear power plants came to a head in 1979, with the Three Mile Island incident, a partial meltdown at a nuclear facility in Pennsylvania, USA.

In a referendum a year later, the question was not if the plants should be kept or not, but only how fast they should be shut down. The nuclear issue was so contentious that three governments resigned over it.

According to the result of the 1980 referendum, all of Sweden’s nuclear power plants should have been shut down by 2010, but now, in 2013, only two reactors have been shut down, and 10 are still running. Decisions have also been made to build new reactors to replace the old.

“The general public is more positive to nuclear power today. This trend can be traced to 2006, when the climate issue really came into focus,” Anselm said.

As a comparison, in Germany, the general public has remained involved and highly critical. Anti-nuclear activists resort to laying down on the railway tracks leading to nuclear power plants.

Unlike Swedish politicians, German politicians exhibited strong reactions to the Fukushima disaster. It caused the German government to decide that all German nuclear power plants should be shut down by 2022, and eight of them were closed immediately.