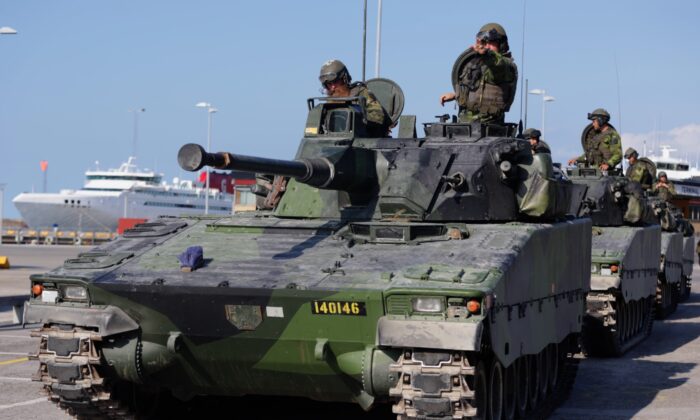 Swedish military armored vehicles in the harbour of Visby, on the Gotland island in Sweden on Sept. 14, 2016. (Soren Andersson/AFP via Getty Images)
Europe

The Swedish government on Friday announced plans to allocate more than $160 million to further increase its military capabilities on a strategically important island in the Baltic Sea amid security threats from Russia over its likely NATO membership.

“The aim is to be able to house many more conscripts and to make operations more effective, and in that way contribute to greater capacity … on Gotland,” said Elger.

Gotland is strategically important due to its ideal location in the Baltic Sea. It is situated around 200 miles from Kaliningrad, the headquarters of Russia’s Baltic Fleet.

Sweden reactivated the army’s Gotland Regiment in 2018, which had been disbanded more than a decade earlier, and has reinforced the island’s defense with surface-to-air missiles and other measures.

Last month, Sweden’s defense minister condemned Moscow for violating the country’s airspace after four Russian fighter jets briefly entered its territory just east of Gotland. It is unclear if that incident is related to Sweden boosting its defenses in the same region.

“It will lead to a firm diplomatic response from Sweden,” Peter Hultqvist told news agency TT at the time. “Swedish sovereignty and territory must always be respected.”

Meanwhile, Sweden’s prime minister Magdalena Andersson said on Friday the government does not plan to hold a referendum if its parliament decides to proceed with an application for NATO membership, explaining she believes a referendum was a “bad idea.”

“I don’t think it is an issue that is suitable for a referendum,” Andersson told reporters. “There is a lot of information about national security that is confidential, so there are important issues in such a referendum that cannot be discussed and important facts that cannot be put on the table.”

Following Russia’s attack on Ukraine in February, both Sweden and Finland reviewed long-held beliefs that military neutrality is the best means of ensuring national security. Both Nordic countries are now likely to join NATO and could apply for membership simultaneously as soon as mid-May, according to reports.