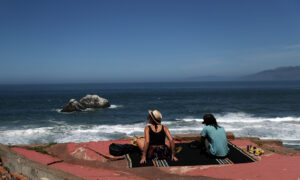 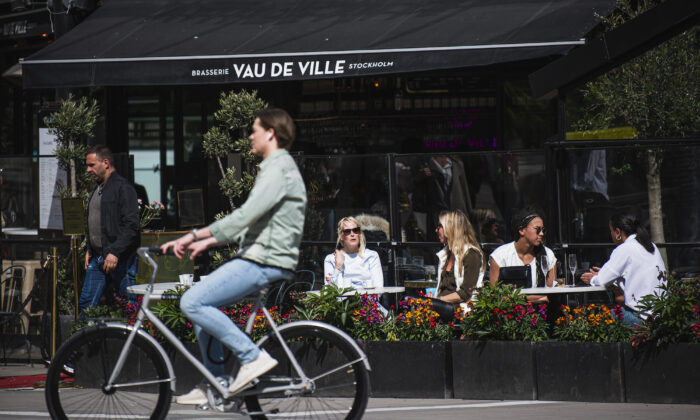 People sit in a restaurant in Stockholm, Sweden, on May 8, 2020. (Jonathan Nackstrand/AFP via Getty Images)
Viewpoints

Sweden offered hope that the coronavirus could be reined in without great inconvenience or economic pain. Unlike its neighbors in Scandinavia and elsewhere, Sweden didn’t put its people in strict lockdown. Restaurants, bars and shops buzzed with their usual customers. Gyms stayed open, and kids under 16 went to school.

Images of Swedes sunning themselves at crowded cafes dowsed many quarantined Americans and Europeans with envy. Even as other societies start letting people venture forth, they still generally require masks for entry in stores and other businesses.

Oh, how we wished Sweden’s approach would work! Apparently, it didn’t.

Sweden’s economy, meanwhile, is expected to shrink a punishing 7 percent this year, about the same as that of the rest of the European Union. And Swedes may be blocked from other countries opening up as part of an effort to close the doors to high-risk COVID-19 areas.

The mastermind behind Sweden’s controversial strategy on the virus, epidemiologist Anders Tegnell, has admitted the errors of his thinking. He told Swedish radio that had he known what would have happened, he would have advised a more restrictive policy.

His plan went like this: The most vulnerable Swedes would isolate themselves while the young and healthy people out and about would contract the disease and recover—and build antibodies against reinfection. This would create a herd immunity, whereby enough people become resistant and the virus fades for lack of victims. Herd immunity also occurs when large majorities get vaccinated against a specific disease.

Meanwhile, the economy would thrive, according to the theory. But now Sweden’s finance minister is sounding the alarm that the country is about to enter the worst economic downturn since World War II.

Making the flaws in Tegnell’s approach more vivid are the factors that should be minimizing Swedish death rates. Sweden has one of the lowest obesity rates in Europe. (Excess weight is a risk factor for coronavirus death.) Sweden already benefited from low population density and a large proportion of people living alone. And its strong public health system enables Sweden to provide good care to those afflicted.

Before the bad news started pouring in last month, the Swedish approach had garnered both fans and critics. Experts in the science of disease spread regarded the Swedish people as a control group in a global study. How would they fare next to those in other countries that greatly limited human interaction? Not so well, it seems.

America has embarked on its own controlled experiment whereby some parts of the country are throwing off restrictions while others are doing it slowly. Even Sweden banned gatherings of more than 50 people—and continues to do so. There are no such rules in many parts of the country.

You do wonder what’s going to happen to the maskless revelers who famously jam-packed a Memorial Day pool party at the Lake of the Ozarks in Missouri. At least one attendee has tested positive for the virus. Same question applies to the crowds filling bars in Texas and beaches in Florida.

Many officials are concerned that the recent mass protests during which participants stood inches apart, many without masks, would undo the hard social-distancing work that had slowed the virus. It was hoped that higher temperatures would help, but now there’s fear that good weather could encourage crowding.

Sweden has shown that, barring the invention of a vaccine, there is no easy way out of this scourge.