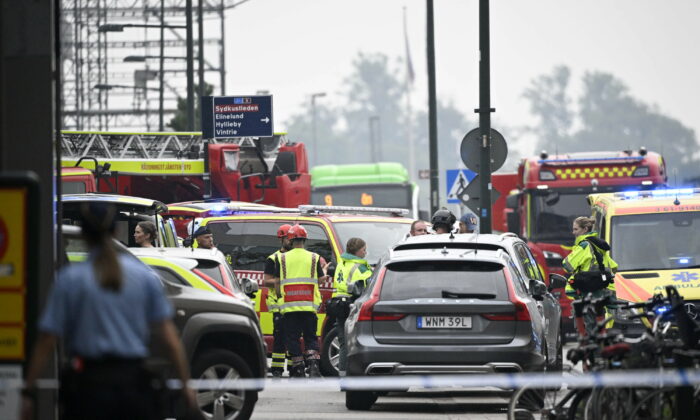 Police officers cordon off the area of a shooting outside the Emporia shopping center in Malmo, Sweden, on Aug. 19, 2022. (Johan Nilsson/TT News Agency via AP)
Europe

STOCKHOLM—Swedish police say two people have been wounded in a shooting at a shopping center in the southern city of Malmo.

A suspected was arrested after the shooting Friday afternoon at the Emporia shopping center, which police said appeared to be gang-related.

“Police are on site with big resources to map the incident by interviewing witnesses and going through material from surveillance cameras. The immediate danger to the public appears to be over,” Malmo police said.

Shootings by criminal gangs have become a growing problem in Sweden in recent decades, including in Malmo, the country’s third-biggest city. Gang violence is among the main campaign issues ahead of Sweden’s national election on Sept. 11.

Last month a gunman opened fire inside a shopping mall across the Oresund Strait in the Danish capital, Copenhagen. Three people were killed and four wounded. Police said the suspect in that shooting, a 22-year-old Dane, apparently selected his victims at random.