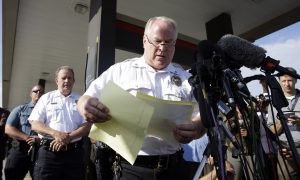 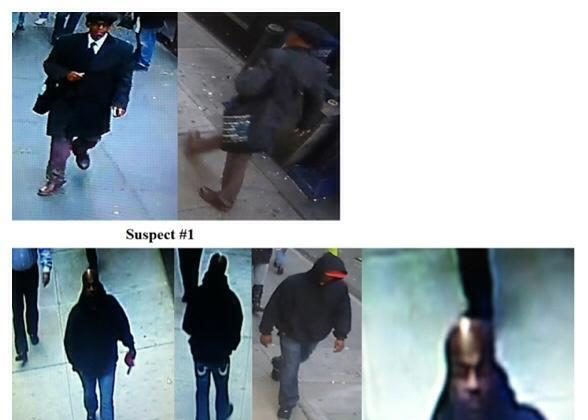 UPDATE: Photos of suspects have been released. Police is asking for any information about the two men to be conveyed to the phone number  800-577-TIPS.

NEW YORK—A block away from the Veteran’s Day parade on Fifth Avenue, there was an armed robbery of a jewelry store “Standard Watches” on the eighth floor of the 23 West 47th Street building in the Diamond District.

Police responded to a 911 call for a robbery that happened around 2:30 p.m., according to Sergeant Carlos Naves.

Two men robbed the store at gunpoint. One was dressed in jeans and a black sweatshirt, and the other man posed as a deliveryman, wearing a dress shirt and suit coat.

The fake deliveryman pulled out a handgun and demanded to be taken to the safe. There were four employees in the store at the time, police said. Then a fifth entered.

The man dressed as a deliveryman pushed the fifth employee against a wall, and struck him in the head with a firearm. The robbers then fled with products taken from the store, police said.

Police officers blocked off 47th Street from Fifth Avenue to Sixth Avenue with trucks and cars for about two hours. Two helicopters were circling above the scene as a SWAT team moved in.

The streets were reopened to traffic after 6 p.m.

“The security on the block was very good. The police reacted right away and the block was swarmed with police,” said Mehmet Gulay, president of City’s Property Development, who runs a jewelry shopping mall at the International Gem Tower on 47th Street.

Many local jewelers emptied their shelves and closed down, but the shopping mall stayed open, except for the entrance being blocked by the police for about two hours.

“We didn’t really have any problem in our shopping mall. We felt quite safe,” Gulay said. “The life is back to normal now in the Diamond District.”