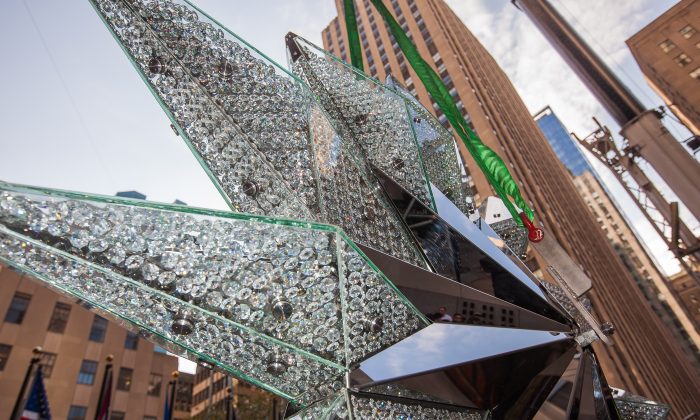 A 550-pound Swarovski crystal star is prepared for its ascent to the top of the Christmas tree at Rockefeller Plaza in Manhattan, New York, on Nov. 13, 2014. (Petr Svab/Epoch Times)
New York

NEW YORK—With careful preparation, the 550-pound star rose up in the air, glittering in the midday sun. Almost 10 feet tall, it is the crown jewel that has adorned the Christmas tree at Rockefeller Plaza in New York since 2004.

The metal and glass treasure is made of 25,000 crystals shimmering from inside with the help of 720 LED lights. It was commissioned by D. Swarovski & Co. crystal maker in 2004 and designed by German artist Michael Hammers.

The star sits on top of a 85-foot tall Norway spruce, the tallest tree the plaza has seen since 2006. Erik Pauzé, head gardener at Rockefeller Center, selected the tree in Bloomsburg, P.A.

A tree-lighting will take place Dec. 3.