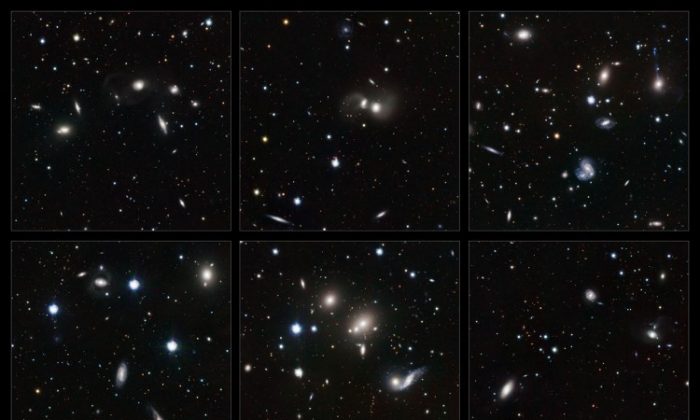 These highlights, taken from a new image of the young Hercules galaxy cluster by the VLT Survey Telescope (VST) and the OmegaCAM camera, show a wide variety of interacting galaxies. (ESO/INAF-VST/OmegaCAM. Acknowledgement: OmegaCen/Astro-WISE/Kapteyn Institute)
Science

The vibrant interactions between hundreds of galaxies in the Hercules galaxy cluster have been imaged by the European Southern Observatory’s (ESO) VLT Survey Telescope (VST).

Also known as Abell 2151, this cluster has a somewhat irregular shape and is located about 500 million light-years away. It includes various types of galaxies, especially young, gas-rich, star-forming spiral galaxies, but no giant elliptical galaxies are visible.

Throughout the image, pairs of galaxies are seen forming mergers, and the numerous spiral galaxies suggest that the cluster is relatively young. Mature clusters tend to contain more elliptical galaxies due to distortion from collisions, with less star formation as the necessary gas and dust are lost during this process.

Clusters like this one form due to the gravitational pull between smaller galaxy groupings, which causes the cluster to become a denser, more spherical aggregation. As the galaxies move closer, they begin to interact.

Abell 2151 is thought to be composed of three or more smaller clusters, and is simultaneously merging with other large clusters to become a galaxy supercluster, according to a press release.