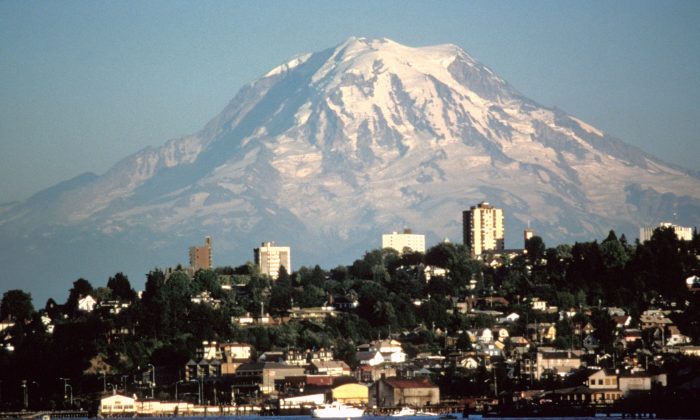 Some two dozen minor tremors have hit Mount Rainier, the active volcano towering over the Seattle metro area, over the past week.

The 14,000-foot snowcapped volcano stands less than 40 miles from the densely populated area of Tacoma, Bellevue, and Seattle.

While the frequency of the tremors concentrated near Mount Rainier’s summit is higher than usual, similar bouts of quakes have shaken the volcano before and usually don’t signify an imminent eruption, said Prof. Paul Bodin, PNSN manager of University of Washington, according to The Seattle Times.

“In the past, these swarms last a couple of days to a week or so and then die out,” he said.

Active volcanoes commonly produce some level of seismic activity. Earthquake swarms are less common, but do happen repeatedly without leading to an eruption.

Over 100 tremors hit near Soda Springs, Idaho, several weeks ago, starting with a 5.3 magnitude quake.

The Yellowstone supervolcano is experiencing one of the most active years on record with over 2,300 quakes this year, the largest one at 4.4 magnitude.

Bodin said the Mount Rainier quakes were too shallow to suggest a connection with deep magma movements.

“So I’m treating this as a single eyebrow raised halfway,” he said. “Yeah, I see you and will be watching, but I don’t think you’re going to attack.”

Earthquakes in Washington aside, this year has brought an abundance of natural disasters. Wildfires in the western states and in Canada; major hurricanes Harvey, Irma, and Katia coming in close succession; two devastating earthquakes striking Mexico in two weeks; monsoon flooding in Asia claiming some 1,300 lives; and heatwaves hitting California and Europe.

As The Epoch Times’ Tom Lewis wrote, “If it feels like there’s an increasing number of natural disasters occurring lately, you may have cause to think that way.”