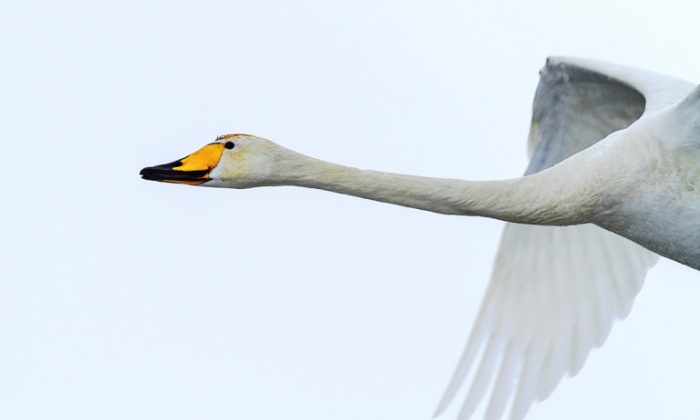 A swan's neck works like a car's suspension system, offering a smooth ride over a bumpy road. (porojnicu/iStock)
Science

Swans and geese are the envy of aeronautical engineers. Even plump geese can perform remarkable aerial acrobatics—twisting their bodies and flapping their powerful wings while keeping their heads completely still.

Now, engineers have used high-speed video footage and computer models to reveal that whooper swans stabilize their heads with a complex neck that’s tuned like a car suspension.

Their findings have influenced a new design of a camera suspension system that could allow drones to record steadier video.

All birds have built-in vision stabilization to compensate for the up and down body motion caused by flapping their wings in flight. Scientists have studied the neck morphology and head motions of walking or stationary birds, but measuring the mechanism in flight has not been successful until now.

For a new study, published in Journal of the Royal Society Interface, researchers devised a method for comparing high-speed video data of a whooper swan flying over a lake with a computer model that approximated the springy damping effects of the bird’s neck that allow it to stabilize the vertical disturbances.

They found the neck functions much like how a car’s suspension system provides a smooth ride over a bumpy road. The neck vertebrae and muscles respond with just the right stiffness and flexibility to passively keep the head steady during flapping flight, and even in mild gusts.

Related Coverage
In the Age of Drones, Who Owns the Sky?

Yes, I Wish This Self-Flying Drone Taxi Was Real Too (Video)

“This simple mechanism is a remarkable finding considering the daunting complexity of avian neck morphology with about 20 vertebrae and more than 200 muscles on each side,” said David Lentink,  assistant professor of mechanical engineering at Stanford University.

Lentink credits much of the work to a former master’s student, Ashley Pete, who is first author on the study. She developed the idea and methodology for the study in Lentink’s class, ME 303: Biomechanics of Flight.

“The paper she wrote for this class was so good that we expanded it together and submitted it to Interface, where it got published,” Lentink said. “This really shows students can make remarkable discoveries in the classroom, going beyond textbooks, based on their creativity and enthusiasm.”

The focus of Lentink’s lab group spans biology and engineering, with goals of improving drone design and performance by understanding and adopting key characteristics from flying birds.

The current work has provided guidelines for a prototype swan-inspired passive camera suspension system, developed by Marina Dimitrov, one of Lentink’s undergraduate students, that could allow drones with flapping wings to record better video.