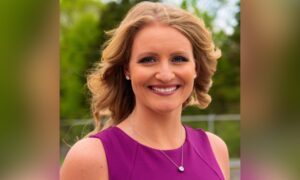 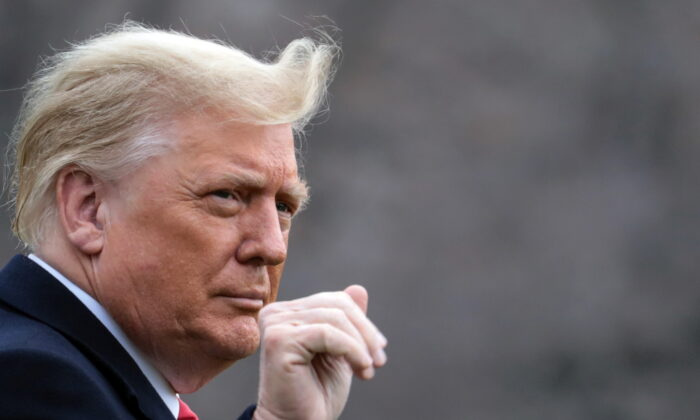 President Donald Trump departs on travel to West Point, N.Y., from the South Lawn at the White House on Dec.12, 2020. (Cheriss May/Reuters)
Politics

President Donald Trump was urged to veto the omnibus spending bill by a group of Republican House members, who say it’s an example of a “massive take-it-or-leave-it bill” that’s now commonplace in Washington.

A letter to the president signed by 14 Republicans called on Trump to veto the bill, claiming that it was “negotiated behind closed doors” and greatly expands the size of the federal government.

“This bill continues to pile massive amounts of debt on top of the $27.5 trillion we already have,” they wrote. The letter was signed by Reps. Andy Biggs (R-Ariz.), Jody Hice (R-Ga.), Chip Roy (R-Texas), Louie Gohmert (R-Texas), Paul Gosar (R-Ariz), and others.

“Particularly at a time when our federal government is spending trillions of dollars on an emergency basis, we should be doing the hard work of finding offsetting savings elsewhere,” they wrote.

“Instead of making any good faith effort to find savings, this omnibus bill spends every penny on the existing—but elevated multiple times over—budget caps that were enacted before the coronavirus epidemic. Your veto will send a resounding message to both Republicans and Democrats in Congress to negotiate better budgets for the American people.”

They also said the bill contains provisions that support longstanding policies to fund a school system “that is failing to educate our children,” fund states with “broken” election systems, underfund border security measures, and will “continue war without so much as a debate much less a vote,” among other provisions, according to the lawmakers.

“This bill promises to be even larger, exemplifying everything that is wrong with the swamp politics of Washington, D.C.,” they wrote.

The letter was first reported by Fox News on Dec. 17.

The lawmakers noted that Trump, in 2018, said in public remarks that he “would never sign another bill like this again” after signing an omnibus spending bill into law.

“Our country will be better off if you veto this omnibus appropriations bill for fiscal year 2021,” they said.

Earlier this week, Senate Majority Leader Mitch McConnell (R-Ky.) told reporters that a deal is getting closer to reality.

“We’re making significant progress, and I’m optimistic that we’re going to be able to complete an understanding sometime soon,” he said. “Everybody wants to get a final agreement as soon as possible. We all believe the country needs it. And I think we’re getting closer and closer.”

Both McConnell and Pelosi have said that neither chamber of Congress will leave for its scheduled recess until the omnibus spending bill is finished. They also promised to pass a CCP virus relief bill.

Meanwhile, House Minority Leader Kevin McCarthy (R-Calif.) told reporters after he met with Pelosi, McConnell, and Sen. Chuck Schumer (D-N.Y.), the Senate minority leader: “I think we’ve built a lot of trust. I think we’re moving in the right direction. I think there’s a possibility of getting it done. So we’re finalizing out to see if it’s possible.”