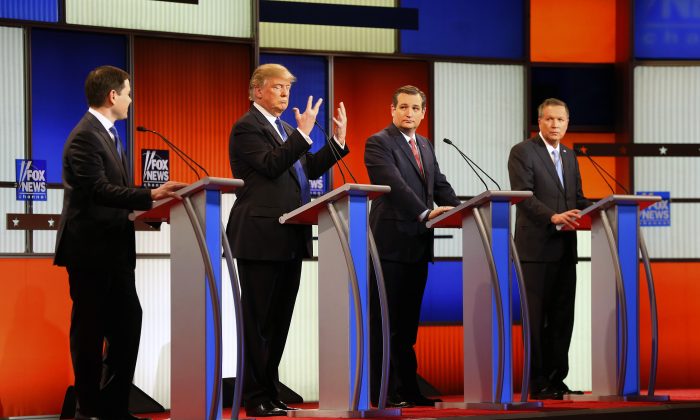 DETROIT—The Republican establishment and its last best hopes to defeat Donald Trump spent a long and extraordinary day denouncing the billionaire businessman as dangerous, a “phony” and a “con man” unfit for office. Then, when it was all over, Marco Rubio, Ted Cruz and John Kasich swallowed hard and said they’d support Trump if he wins the GOP nomination.

Their pained commitments, at the end of the 11th GOP debate on Thursday, put into sharp focus the dilemma the Republican Party faces as Trump continues to dominate the race for delegates and the campaign conversation.

I’ll do everything within the normal political bounds to make sure we don’t nominate Donald Trump.
— Mitt Romney

Beyond harsh words, GOP leaders see little opportunity to stop Trump’s march toward the presidential nomination. Panicked party leaders are poring over complicated delegate math, outlining hazy scenarios for a contested national convention and even flirting with the idea of a third-party effort to derail Trump’s insurgent candidacy.

A tumultuous day opened with Mitt Romney, the party’s 2012 presidential nominee, making a rare public appearance to denounce Trump as a fraud who is “playing the American public for suckers.” Speaking to NBC’s “Today” Friday, Romney said he will “do everything within the normal political bounds to make sure we don’t nominate Donald Trump.”

He ruled out that he will run for the presidency but also ruled out ever voting for Trump or Democratic front-runner Hillary Clinton.

Trump lashed back. In the evening debate in Detroit, he called Romney “a failed candidate” who lost to Barack Obama four years ago.

“Obviously, he wants to be relevant,” Trump said dismissively.

It was telling evidence of the party’s conundrum when Rubio and Cruz, clearly lacking enthusiasm, signaled their willingness to vote for Trump after spending much of the debate leveling withering criticism at his “flexible” policy positions and personal ethics.

The two senators, who in earlier debates had devoted considerable time to throwing sharp elbows at one another, pressed Trump aggressively on his conservative credentials, his business practices and changing policies.

Questioned about any number of issues, Trump signaled a willingness to deal.

He said it was fine that Florida Sen. Rubio had negotiated with other lawmakers on immigration policy.

I have a very strong core. But I’ve never seen a successful person who wasn’t flexible.
— Donald Trump

When Fox News moderator Megyn Kelly told Trump his shifts caused some people to question his core, Trump insisted: “I have a very strong core. But I’ve never seen a successful person who wasn’t flexible, who didn’t have a certain degree of flexibility.”

The issue was fresh on Cruz’s mind as he campaigned in Maine on Friday, lashing out at his rival over his suggestion that Richard Haass, head of the Council on Foreign Relations, “is excellent” and someone he would entrust to oversee the nation’s national security.

Cruz called Haass a “liberal client” of Democrat Hillary Clinton. “That was a fairly extraordinary admission,” Cruz said Friday at the University of Maine.

The bad blood among the candidates flowed freely, a steady stream of insults interspersed with the policy debate. And early on in the evening, Trump nonchalantly tossed out a crude sexual reference.

Rubio justified his attacks on Trump by saying the billionaire businessman had “basically mocked everybody” over the past year. Trump countered with a feint, saying he’d called Rubio a “lightweight” in the past but “he’s really not that much of a lightweight.”

In one particularly sharp exchange, Rubio renewed his criticisms of Trump University, which charged students $1,495 each for seminars that would teach them the billionaire’s secrets to making it big in real estate. A lawsuit filed by the New York attorney general claims the classes fell so short of promises that it amounted to fraud.

He’s trying to con people into giving him their vote.
— Marco Rubio

“He’s trying to con people into giving him their vote just as he conned those people,” Rubio said.

Cruz, tag-teaming on the issue, added, “If we nominate Donald, we’re going to spend the fall and the summer with the Republican nominee facing a fraud trial.”

Trump shrugged it off, saying: “It’s a minor civil case. Give me a break.”

And he turned the tables, saying Rubio is “the real con artist.” He said the first-term senator “scammed the people of Florida” by skipping so many Senate votes.

With Ben Carson’s exit from the race this week, the field of Republican candidates has now been narrowed to four. But any number of predictions that GOP voters would unite behind one anti-Trump candidate have come and gone without a change in the overall dynamic.

Still, the front-runner is not yet on track to claim the nomination before the party’s national gathering in July, according to an Associated Press delegate count. He has won 46 percent of the delegates awarded so far, and he would have to increase that to 51 percent in the remaining primaries.

The GOP mayhem contrasts sharply with a clearer picture on the Democratic side, where Clinton is drawing broad support from voters and her party’s leaders. Rival Sen. Bernie Sanders has vowed to keep up his fight, though his path to the nomination has become exceedingly narrow.