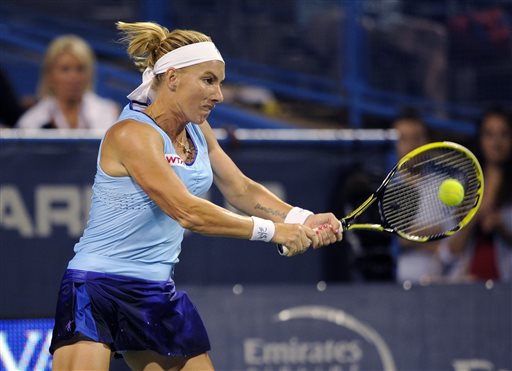 Svetlana Kuznetsova, of Russia, chases the ball against Ekaterina Makarova, of Russia, during a match at the Citi Open tennis tournament, Saturday, Aug. 2, 2014, in Washington. (AP Photo/Nick Wass)
Sports

Svetlana Kuznetsova of Russia will take on Kurumi Nara of Japan in the Washington Open, also known as the Citi Open, on August 3.

Unfortunately, it’s unclear which stations the match will be broadcast on anywhere in the world, although Eurosport typically broadcasts tennis games in Russia while WOWOW Live often broadcasts them in Japan.

Live streaming will be available through Tennis TV.

Kuznetsova is ranked No in the tournament and No. 26 in the world.

Nara is unranked in the tournament and No. 40 in the world.

It appears that the women have never played each other as of yet.

Kuznetsova has won two majors so far. She beat Ekaterina Makarova 6-3, 6-2, in the semifinals while Nara came back after dropping the first eight games to defeat Marina Erakovic 0-6, 6-4, 6-4.

There have only been three women’s finals in the Washington Open before this year. Slovak Magdalena Rybarikova won the last two while Russian Nadia Petrova won the one in 2011.

This year’s men’s final will see Canadian’s Milos Raonic and Vasek Pospisil face off for the right to become the first Canadian singles winner of the Washington Open.

The men’s final is right before the women’s final.