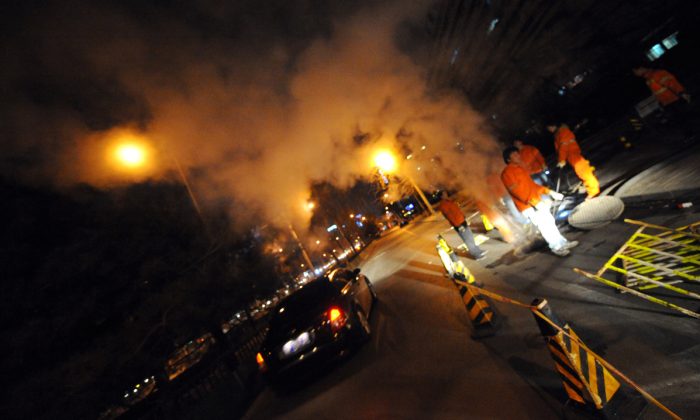 A man driving a construction vehicle at night was violently rear-ended by a car, which burst into flames from the crash. The driver who was rear-ended was put under arrest for not trying to help the passengers who were trapped inside the other vehicle, according to Chinese state-sponsored media The Beijing News.

The crash happened in Beijing in the early morning of July 16. Two people were in the white SUV, but reports did not say if the impact of the crash or the fire was the cause of death. However, many Chinese social media users were quick to blame the driver of the front loader, surnamed Qi, for not making any attempt to rescue them.

Video footage shot by drivers who stopped on the side of the road reveals that the car’s hood and windshield were crushed in the impact. Smoke billowed out of the SUV’s engine. Qi is seen standing by talking on his cellphone.

“Move you [your] car forward, it’s going to explode!” a man recording a video of the incident shouts at Qi.

Moments later, the SUV catches fire. “There’s people inside of there,” the man recording the video says. By the time they get the fire extinguishers, the fire has already taken over half of the car.

“I don’t know how to use this, it was in my car,” a voice says off-camera as someone works to open a small fire extinguisher. “I don’t know, but hurry up!”

A shirtless man walks to the SUV driver’s side and sprays a can of fire extinguisher onto the blaze. “It’s already too late, we’ve used several fire extinguisher cans,” the man recording the video says. There appears to be no effect on the fire.

“We’ve used the fire extinguishers from our cars,” the man says as he now records the video from a further distance. “There’s nothing we can do, really.”

Much of the car was engulfed in flame when the fire department arrived.

Qi was arrested for being suspected of being at fault for the two deaths.

“According to law, this is intentional murder, which is much more severe than simply causing trouble,” wrote user “North American Troll Group.”