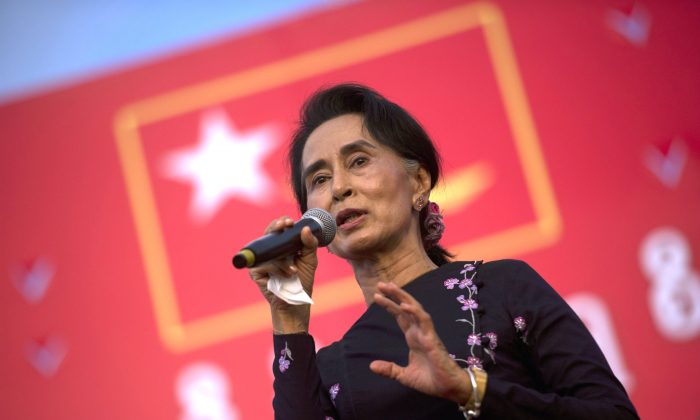 YANGON, Burma—Nobel laureate Aung San Suu Kyi’s opposition party was on the verge of a formal victory Thursday, as continuing results from Burma’s historic polls pointed to a landslide win for the pro-democracy crusader and a resounding rejection of military rule.

Attention was riveted on what has been called the “magic number” for Suu Kyi’s party. The election commission announced more results showing the National League for Democracy party needs just 38 more seats to achieve the 329 seats it needs for a majority in the 664-member, two-house Parliament.

Elections were not held in seven constituencies, meaning a simple majority can be reached at 329. The NLD has won 196 seats in the lower house and 95 in the upper house for a total of 291. More results from Sunday’s voting were to be announced later Thursday.

A party with a combined parliamentary majority is able to select the next president, who can then name a Cabinet and form a new government.

The military establishment has not formally conceded defeat but has acknowledged the massive success of Suu Kyi’s party, and has pledged it will respect the final election results.

Suu Kyi’s party said Wednesday it received a message from Information Minister Ye Htut on behalf of President Thein Sein congratulating it for leading the race for parliamentary seats.

Ye Htut said the government will pursue a peaceful transfer of power “in accordance with the legislated timeline.” He was not immediately available for comment.

Thein Sein is a former general who has led the military-backed government for the past five years.

The message helps ease lingering concerns that the military, which has a large influence over the ruling party, might deny the NLD power, as it did after elections in 1990.

It also means that Burma (also called Myanmar) is likely to soon have its first government in decades that isn’t under the military’s sway. But while an NLD victory virtually assures it of being able to elect the president as well, Suu Kyi remains barred from becoming president by a constitutional provision inserted by the military before it transferred power to a quasi-civilian government in 2011.

Suu Kyi has declared, however, that she will become the country’s de facto leader, acting “above the president” if her party forms the next government.

She described that plan further in an interview Tuesday with Singapore’s Channel News Asia television.

“I make all the decisions because I’m the leader of the winning party. And the president will be one whom we will choose just in order to meet the requirements of the constitution,” she said. “He (the president) will have to understand this perfectly well that he will have no authority. That he will act in accordance with the positions of the party.”

The military, which took power in a 1962 coup and brutally suppressed several pro-democracy uprisings during its rule, gave way to a nominally civilian elected government in 2011 — with strings attached.

It installed retired senior officers in the ruling party to fill Cabinet posts and gave itself key powers in the constitution, including control of several powerful ministries and 25 percent of the seats in both houses of Parliament. In a state of emergency, a special military-led body can even assume state powers. Another provision bars Suu Kyi from the presidency because her sons hold foreign citizenship.

While Burma’s people voted overwhelmingly Sunday to remove the military-backed Union Solidarity and Development Party from power, it’s clear that the army’s involvement in politics won’t end, and the NLD will need to convince it to cooperate.

NLD co-founder Tin Oo told The Associated Press on Tuesday that the party expects to win about 80 percent of the votes — putting it on pace with the party’s 1990 landslide that the military annulled.

If the NLD secures a two-thirds majority of the parliamentary seats at stake, it will gain control over the executive posts under Burma’s complicated parliamentary-presidency system.