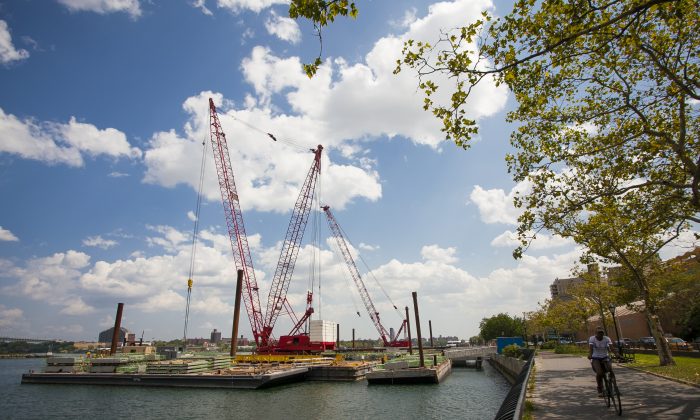 The site of the 91st Street garbage disposal station on the Upper East Side, New York, taken on August 7, 2014. Continued debate over the station's construction has raised questions about how New York City can dispose of its waste in a fair and environmentally conscious way. (Samira Bouaou/Epoch Times)
New York

NEW YORK—In the latest news surrounding the planned 91st St. garbage transfer station on the Upper East Side, Asphalt Green, a nearby sports complex, has come up with an alternative proposal to build public parks over the site.

Garbage trucks would bring trash to the station, where it will then be packed into containers that will be placed on barges, to be transported to landfills outside the city. The continued debate over the station’s construction has raised questions about how New York City can dispose of its waste in a fair and environmentally conscious way.

The city planned to build these waste transfer stations so that trash could be distributed more evenly among the five boroughs. Manhattan’s garbage is currently routed to transfer stations in outer boroughs because it does not have an operating station of its own. Transporting by water would also have less environmental impact than the current tractor-trailer trucks that spew high levels of diesel emissions.

Community groups and local residents, on the other hand, argued that placing the facility in their neighborhood and having garbage trucks run in the area would pollute the air and affect people’s health. Building a park over the site would mitigate some of its negative effects, according to Asphalt Green.

Converting waste facilities into green space isn’t a new idea. On the other side of the island on the Upper West Side, plans developed for a park on top of the North River Sewage Treatment Plant, after residents complained of respiratory ailments and the offensive smell.

Seven years after the plant was opened, in 1993, the 28-acre, $129 million Riverbank State Park and recreational facility was completed. It includes an Olympic-size pool, skating rink, theater, and restaurant. At the same time, the plant processes over 170 million gallons of raw sewage a day.

While beautifying garbage facilities allows the public to enjoy recreational space, it still leaves the problem unresolved of how to deal with the city’s increasing piles of trash.

Currently, the city diverts its waste to incinerators and landfills out-of-state. Most of the city’s trash goes to New Jersey, but it also gets to upstate, Pennsylvania, and South Carolina. Trucking huge amounts of trash is both costly and polluting to the air.

Low-income communities have historically been disproportionally burdened with having trash facilities in their backyard, and are stuck living with the stigma and air pollution that comes with it, said Ana Baptista, a professor in the environmental policy and sustainable management program at the New School’s Milano School of International Affairs, Management, and Urban Studies.

To truly dispose of waste sustainably, Baptista says people need to reduce the amount of waste they produce themselves. “That’s the heart of the problem. Unfortunately, we’re at a point that we have to worry about distribution because we have so much trash and not a lot of space to put it, and it’s not fair to put it all in these communities,” she said.

The city can establish an incentive program, like in San Francisco, where residents and businesses are required to separate their trash into non-recyclable, recyclable, and compostable and are directly charged for trash pickup. This incentivizes people to throw out less trash, since they will pay less, said Baptista.

In New York City, residents pay taxes that go toward paying for the city sanitation department’s trash pickup, so the incentives are less apparent. But the city can set up a tax break program where residents get their taxes refunded in exchange for separating trash correctly, said Benjamin Miller, co-founder of Closed Loops, a sustainable urban planning firm.

He estimates that an incentive program can reduce New York City’s waste by at least 12 percent, based on other cities that have adopted this strategy—while saving the city millions of dollars. “It would be the simplest solution and also politically popular,” Miller said.

In addition, the city can reduce the amount of trash it transports out-of-state if it builds infrastructure to process organic waste—which makes up about a third of the total, according to the sanitation department. Compost can be broken down in anaerobic tanks and converted into natural gas or fertilizer.

In fall 2012, the sanitation department began a pilot program for compost collection in select neighborhoods and schools. It will run through July 2015.

Former city sanitation commissioner Brendan Sexton said to reduce the city’s waste, recycling should be enforced more strictly. “It’s the law. We should be requiring by virtue of having people going out and writing tickets,” Sexton said, who is now an environmental consultant. He noted that recycling rates were especially low in the city’s public housing projects.

Sexton said there needs to be more social awareness that recycling is not a nuisance, but required by law. “We need to raise a generation that wastes less and recycles everything they can,” he said.