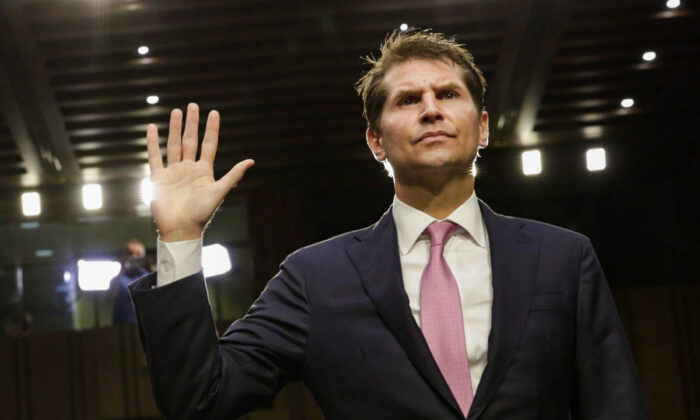 Former Clinton Campaign attorney Michael Sussmann’s attorneys want notes recorded by two FBI officials from being introduced as evidence when their client goes on trial for lying to the agency in September 2016 as he delivered debunked allegations regarding a “secret server” link between the Trump Organization and a Russian bank.

Special Counsel John Durham has entered as evidence notes taken by then-Assistant FBI Director for Counterintelligence E. William “Bill” Priestap and then-Deputy General Counsel Trisha Anderson, who both spoke with FBI General Counsel James Baker shortly after he met with Sussmann on Sept. 19, 2016, at the agency’s headquarters in Washington, D.C.

Sussmann is set to go on trial beginning May 16 in the U.S. District Court in Washington for claiming he was acting as “a concerned citizen” when he met with Baker while working for Rodney Joffe, a cybersecurity expert whose firm had a contract with Executive Office of the President to monitor DNS (Domain Name System) traffic; and for Hillary For America, Hillary Clinton’s 2016 campaign committee, which Sussmann’s Washington, D.C.-based law firm Perkins Coie represented.

In their motion, Sussmann’s attorneys argue that Durham himself has said in previous court statements that a “jury will have to decide only whether the defendant knowingly and willfully made a materially false statement” when meeting with Baker.

“Nothing more, nothing less,” they write. “We agree. And yet throughout this case and his motion, the Special Counsel seeks to put other people, other conduct, and other issues on trial that have nothing to do with the narrow false statement crime the Special Counsel has actually brought against Mr. Sussmann.”

“These notes—taken by two people who were not even witness to Mr. Sussmann’s statement—epitomize the type of untrustworthy evidence the hearsay rules are meant to exclude and, if admitted into evidence, would prejudice Mr. Sussmann and mislead the jury to overvalue the scattered scribblings of two FBI employees who cannot be subject to meaningful cross-examination,” they continue.

Sussmann’s attorneys maintain that the notes are being entered as a preemptive rebuttal to an argument the defense isn’t making.

“The Special Counsel asserts, without analysis, that if Mr. Sussmann impeaches Mr. Baker’s credibility or memory, the court should admit the notes as Mr. Baker’s prior consistent statements because ‘both sets of notes are squarely consistent with what the government expects the General Counsel will testify at trial,’” the motion reads.

But that is not in line with evidentiary law, they argue.

Baker did not “adopt the notes as accurate and in accord with his own recollection … immediately following his conversations with Mr. Priestap or Ms. Anderson, as is required,” they said. “Mr. Baker reviewed the notes, for the first time, years after they were created.”

Priestap and Anderson cannot “be subject to meaningful cross-examination about the notes or Mr. Baker’s purported statements to them, because they simply do not remember them,” they add, noting that Priestap “does not ‘recall actually writing these notes,’ nor does he even remember who gave him the information in the notes or why he wrote them down.”

Durham said the notes are pivotal to confirming impressions of what Baker told his FBI colleagues after meeting with Sussmann because his recollection of the conversation and his “prior consistent statements” will be questioned extensively by defense attorneys under cross-examination.

Prior consistent statements are “not hearsay,” Durham said, if admitted “to rebut an express or implied charge” of “fabrication or improper influence or motive.”

Contemporaneous notes are “admissible under the hearsay exception for past recollection recorded” which, Durham argues, allows their entry as evidence because it is “a matter the witness once knew about,” they were taken “when the matter was fresh in the witness’s memory” and “record accurately reflects the witness’s knowledge.”

Sussmann’s attorneys argue that Durham is being preemptive in allowing notes to blunt anticipated attacks on Baker’s recall of the meeting, but Durham argues the defense’s “argument puts the cart before the horse” because Priestap and Anderson “have not yet testified at trial” so it is uncertain what they would say.

“The defendant’s reliance on selected quotes from those witnesses’ interview reports and/or prior grand jury testimony is of no moment,” Durham writes.

The motions regarding Priestap’s and Anderson’s notes were among the flurry of April 15 filings, in which Durham alleged Sussmann also conveyed the same false information to the CIA on February 2017 and that five witnesses connected to the Clinton campaign have invoked their Fifth Amendment rights and will not cooperate with the investigation.

The CIA concluded that Sussmann’s allegations that Trump’s business had a secret channel with a Russian bank and a separate allegation about Russian-manufactured phones was not “technically plausible,” did not “withstand technical scrutiny,” “contained gaps,” “conflicted with (itself),” and was “user-created and not machine/tool generated,” according to Durham’s filing.

Cooper, an Obama appointee, rejected Sussmann’s motion to dismiss the case last week and is expected to issue rulings on the many motions as the May 16 trial date nears.

That information handed over by Sussmann to the FBI and the CIA claimed two servers at Alfa Bank, Russia’s largest bank, sent more than 2,700 “look-up” messages in 2016 to a Trump Organization-connected server operated by Spectrum Health, a managed care health care organization in Michigan.

According to a “white paper” Sussmann provided to the FBI, Spectrum Health’s IP address is a TOR exit node “used exclusively by Alfa Bank.” Tor, short for The Onion Router, is open-source software that enables anonymous, presumably untraceable, communication.

However, those 2,700 “look-ups” using a mail1.trump-email.com host were dispatched by Cendyn, which does marketing/promotions for hotels, including for Trump hotels, through a spam email contractor, Philadelphia-based Listrak.

After investigating the claims, The New York Times, The Washington Post, and other legacy media outlets did not publish articles on the allegations until Slate did so on Oct. 31, 2016 — just days before the election.

Reviews by The Intercept, among others, quickly showed the allegations involved spam traffic and that there was no “secret server” between the Trump Organization and Russia.