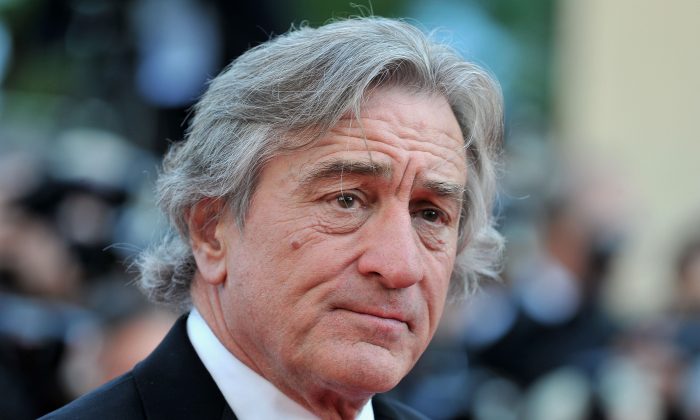 Actor Robert De Niro at the Cannes Film Festival on May 18, 2012 in France. (Pascal Le Segretain/Getty Images)
US News

New York police have responded to a reported suspicious package at the restaurant owned by actor Robert de Niro in New York.

The NYPD bomb squad can be seen in pictures from the restaurant, which is located on Greenwich Street in the fashionable Tribeca area of Lower Manhattan.

“We are responding to reports of a suspicious package in the vicinity of Greenwich and Franklin streets in Tribeca, Manhattan,” said an NYPD statement on Oct. 25.

A WNBC reporter who was on the scene tweeted that many of the surrounding streets had been closed.

The package was sent to the Tribeca Grill restaurant.

According to NBC, police sources close to the investigation said a worker saw similarities in the package to those devices sent to top Democrats and called police.

At a briefing held on Oct. 24 in Manhattan, NYPD Commissioner James O’Neill pledged to bring the perpetrators to justice.

New York Gov. Andrew Cuomo said at the briefing that “we will not allow these terrorist thugs to change the way we live our lives.”

Other Packages Being Investigated

Authorities are also investigating a suspicious package in South Central LA that was addressed to U.S. Rep. Maxine Waters.

Postal workers found the package at the Los Angeles Central Mail facility on Central Avenue near 66th Street. The mail facility was evacuated and a bomb squad called on to the scene, according to KABC.

It was the second package addressed to Waters. The first was addressed to her Washington DC office and intercepted at a congressional mail facility in Maryland, the U.S. Capitol Police confirmed earlier on Oct. 24.

“I have been informed by U.S. Capitol Police that my Washington, DC office was the target of a suspicious package that has been referred to the FBI,” Waters said in a statement on Oct. 24.

The FBI has since confirmed that the two packages addressed to Maxine Waters had a similar appearance to the five other packages that were intercepted on the East Coast between Oct. 22 and Oct. 24.

President Trump addressed the suspicious packages, many of which were found throughout the day on Oct. 24, during his speech at a campaign rally in Mosinee, Wisconsin.

Trump said: “Any acts or threat of political violence are an attack on our democracy itself.

“No nation can succeed that tolerates violence or the threat of violence as a method of political intimidation, coercion or control, we all know that.

“Such conduct must be fiercely opposed and firmly prosecuted. We want all sides to come together in peace and harmony. We can do it … it’ll happen.”

Trump said that in his view, the media held some responsibility for the current political climate of division and distrust between Americans.

“As part of a larger national effort to bridge our divides and bring people together, the media also has a responsibility to set a civil tone and to stop the endless hostility and constant negative and oftentimes false attacks and stories,” he said.