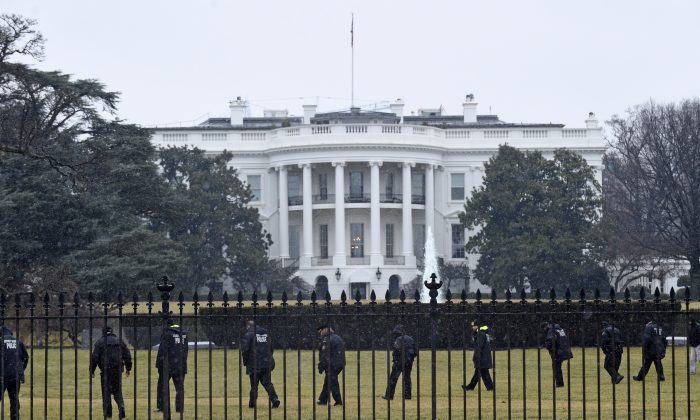 In this Jan. 26, 2015 file photo, Secret Service officers search the south grounds of the White House in Washington after an unmanned aerial drone was found on the White House grounds during the middle of the night. (AP Photo/Susan Walsh)
US

A suspended Secret Service agent was shot and killed in Washington, D.C, officials said on Wednesday.

The agency said the agent was part of its uniformed division.

Authorities said that Arthur Baldwin, 30, was shot multiple times on the 4700 block of 1st Street, The Washington Post reported. He was found unconscious when police discovered him, and he was later pronounced dead at a nearby hospital.

The agency said in a statement, “Secret Service is aware of the information. We express condolences to the family of our employee. Any inquiries regarding the investigation should be directed to Metropolitan Police Department.”

Three men are wanted in connection with the shooting, which took place at around 2:50 p.m. Police are offering a reward of up to $25,000 for information regarding Baldwin’s killing.

Baldwin was suspended after he was charged with first-degree burglary and destruction of property in April. He tried to kick in the door belonging to his former girlfriend during a fight. “I don’t want him to lose his job, he is a police officer,” the unnamed woman said, according to court filings obtained by ABC News.

Police told NBC Washington they believe Baldwin was a victim of attempted robbery, adding they don’t believe his killing had anything to do with his job or charges against him. He wasn’t armed when he was shot, police said.

Baldwin, who had been assigned to the Foreign Missions Branch, was placed on administrative leave earlier in 2015. He appeared in DC Superior Court Tuesday for a status hearing just a few hours before he was shot.

According to court records, Baldwin had been married and has three children. He worked for the Secret Service for eight years.

Over the past several months, there have been incidents involving the Secret Service that have come under investigation. The inspector general was investigating an incident in March in which two high-ranking agency officials were accused of driving into a secure area at the White House after drinking.