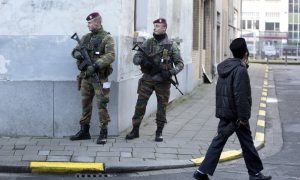 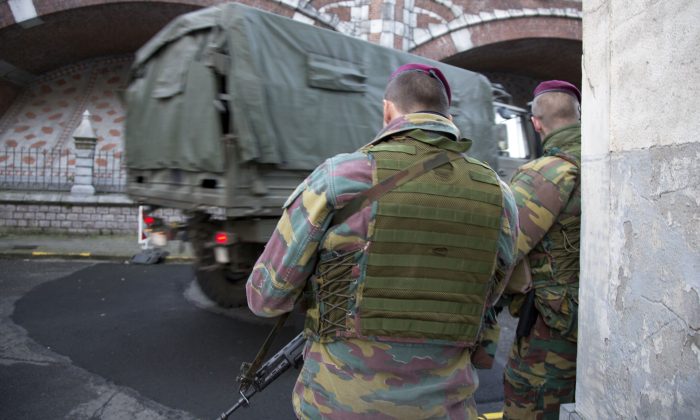 Belgian para-commandos patrol near a synagogue in the center of Antwerp, Belgium, on Saturday, Jan. 17, 2015. Security around Belgium has been stepped up after thirteen people were detained in Belgium in an anti-terror sweep following a firefight in Verviers, Belgium, in which two suspected terrorists were killed. (AP Photo/Virginia Mayo)
Europe

BRUSSELS—With Europe on edge, soldiers fanned out to guard possible terror targets in Belgium Saturday while police in Greece detained at least two suspects as part of a widening counter-terrorism dragnet across the continent.

In France, one of the terrorists behind last week’s attacks in Paris was given a secret burial as authorities sought to head off glorification of terrorism and civil unrest amid a groundswell of popular antagonism across Europe against radical Islam, and protests against caricatures of the Prophet Muhammad across the Muslim world that have underscored vast cultural differences.

For the first time in three decades, authorities used paratroopers to reinforce police in Belgium’s cities, guarding buildings within the Jewish quarter of the port city of Antwerp and some Belgian embassies. The move came a day after anti-terror raids netted dozens of suspects across Western Europe and increased anxiety across big swathes of the region.

Belgium has increased its terror warning to 3, the second-highest, following the anti-terror raids of Thursday which left two suspects dead. Police believe the cell they largely dismantled was on the verge of a major attack.

Authorities said that even though they had broken up the alleged terror cell they were still looking for some suspects abroad and briefly hoped Greece could have clinched the breakthrough by detaining one remaining key suspect.

A Greek police official earlier Saturday said the men were detained separately in Athens, some 2,500 kilometers (1,500 miles) from Brussels, and included an individual who at first sight matched the description of a key terror suspect in Belgium.

The official spoke on condition of anonymity due to the sensitivity of the ongoing investigation.

After careful vetting in Brussels of ID information, federal magistrate Eric Van der Sypt said there was no positive match with any individual they sought and said “they had nothing to do with the Belgian case.”

With some suspects still at large, it was an uneasy calm in Belgium, and paratroopers on the street did not necessarily help.

“You know, when people see the soldiers on streets they will get scared. That could make more problems than solutions,” said student Greg Verhoeven in Antwerp.

France tried to stave off unrest there when Said Kouachi, one of the gunmen who attacked the offices of the satirical magazine Charlie Hebdo, was quietly buried.

After an initial refusal to provide a burial place for Kouachi, the mayor of Reims, Arnaud Robinet, said he was forced to backtrack. Robinet said the government had insisted he allow the elder brother to be buried in Reims because according to French law residents of a town have the right to be buried there.

“He was buried last night, in the most discrete, anonymous way possible,” Robinet said.

Kouachi and his brother Cherif were killed by French counter-terrorism police Jan. 9 after they killed 12 people at the offices of Charlie Hebdo. Cherif Kouachi is to be buried in Gennevilliers, a suburb of Paris where he lived.

Authorities said a third gunman, Amedy Coulibaly, killed five people including four hostages at a kosher market in Paris before he was killed by police. There has been no word of plans for his burial.

“We are one country, one people, one France — without distinction by religion, belief or sensibility,” President Francois Hollande said Saturday in south-central France. “An ardent France against those who want to instill among us who-knows-what war of religion.”

From The Associated Press. Jamey Keaten and Greg Keller in Paris also contributed to this report.